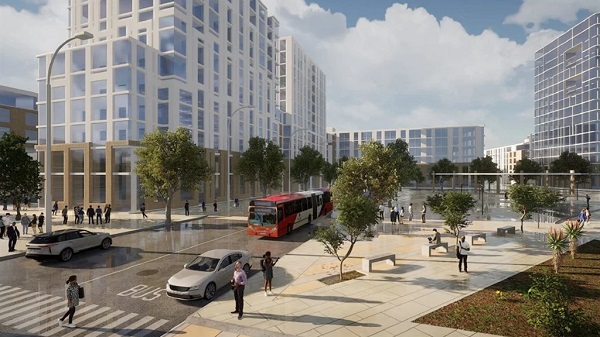 Addressing the Nation Friday, president Cyril Ramaphosa said that the project was part of the wider plan “to make a break with apartheid’s spatial development.”

“The draft masterplan for this smart city – which will become home to between 350 000 to 500 000 people within the next decade – was completed in November 2020 and is now out for public comment,” he said.

The city is designed to be compact with amenities such as schools, hospitals, reactional facilities and shopping centres being as near as possible. Emphasis has been put on convenient walking distances– the 5 minute/400m and 10 minute/800m walk being the basic ergonomic of urban design – and safe, convenient cycling and cycle
systems).

The smart city is designed and structured on social and economic integration (spatially inclusive and democratic in terms of access to learning, opportunity, economic prospect, city-citizenry and being conscientious about avoiding those things which preclude, exclude and divide).

It will also promote the growth of local economies-within the wider ambit of
growing competitive city economies, both regionally and internationally, consciously promoting the integration of dual logic economies such that many complex layers of economy form and coexist and are encouraged to do so.

The masterplan of the Lanseria Smart City also recognizes that much of the population of this future city already exists in Diepsloot, Cosmo City, Lion Park, Zevenfontein, Zandspruit, Porcupine Park and Joe Slovo and will consciously make special connectivity and inclusion of these into the new city and its prospects.

It will promote a city spatial order that encompasses a very wide variety of housing
types, densities and housing rental/ownership models that are not segmented, stigmatized or marginalized in a design logic of safe, convenient walkability and cycling that is based on people-first thinking rather than private car mobility.

It will be consciously based on a variety of public transport systems where, if walking or cycling is not convenient as a default, there is access to safe, dignified, convenient, affordable public transport whether for short or long haul.

It will be a city driven around the economic drivers that create urban prospect for those who have in effect been marginalized on the periphery of an urban system and excluded both by cost and lack of transportation from accessing those parts of the system that do
offer prospect.

It will be a city that sees to the simultaneous social facilities (health, education, culture, leisure and sport, dignified public environments and places of assembly, both socially and around locally-derived economic opportunity).

It will recognize the dignity of higher density urban living not simply as some kind of necessity but a real advantage as opposed to township and suburban sprawl. It will be a city mindful of human scale, both vertically and horizontally, with active urban edges at sidewalk level reminding us that streets are primarily places where society happens, people meet and culture cross.

And by utilizing sustainable technologies such as in waste-to-energy using pyrolysis and water recycling, Lanseria smart city will truly be a green mega city.