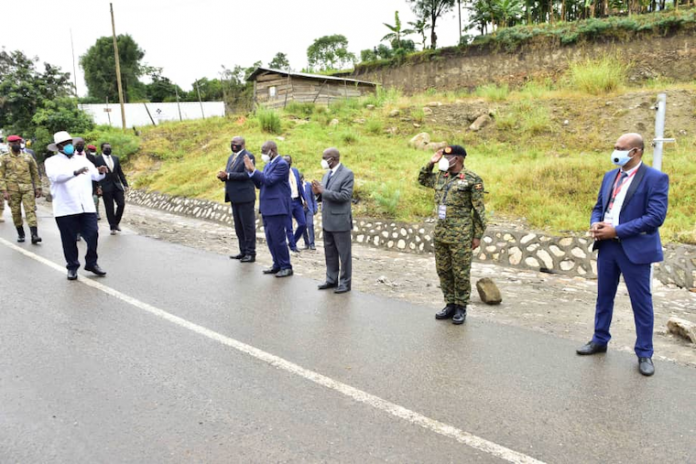 President Yoweri Museveni and his DRC counterpart Felix Tshisekedi have commissioned the start of the construction work of roads in the Democratic Republic of Congo-DRC.

They also launched the Mpondwe bridge in Kasese district.

The two leaders met at the Kisindi border post to launch the projects that will be jointly financed by the two countries. The government of Uganda, through the Minister for Works and Transport is injecting up to 243.7 billion Shillings into the construction of the roads measuring 223km.

The roads consist of the Kasindi section at the border to Beni (80km) plus the integration of the Beni-Butembo stretch (54km). It also consists of the Bunagana to Rutsuru-Goma road (89km).

In his brief address, the DR Congo President said that the development will reinforce the relationship between both countries adding that it’s an excellent gift from his Ugandan counterpart to the people of Congo. He said the project opens DRC nationals to business opportunities in Uganda.

“If this project is complete, it will work towards economic development, that is why we as Congolese encourage it,” Tshisekedi said in his speech president Museveni said Uganda and DRC share a lot in common and the two countries need each other for social-economic transformation and applauded Tshisekedi for fostering peace among her neighbours and bringing DR Congo into the East African community.

Stanley Baluku, a social analyst in Kasese says the move could signal development in terms of regional and international cooperation between the two countries. He says Ugandans especially around the Rwenzori mountains greatly depend on DRC for trade but often are hindered by the poor road infrastructure.