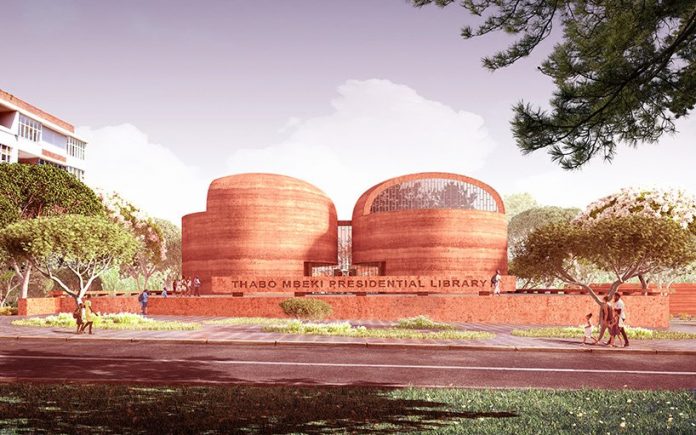 Designed as a space of excellence, learning, research, discourse, and cultural exchange predicated on the african perspective, the library will also serve as a museum with temporary exhibition space and a research center.

The complex will additionally include an auditorium, a women’s empowerment center, a reading room, a shop, a cafeteria, a digital experience space, seminar rooms, and offices. Finally, an archive center will act as a repository for the papers, artifacts, and key documents of president Mbeki — who served as the second president of south Africa from 1999 to 2008 — and other significant African historical figures.

“The Thabo Mbeki centre presents an opportunity to realize the ambition of the dreams of president Thabo Mbeki to advance and empower an African renaissance, “says David Adjaye, founder and principal of Adjaye Associates.

“The architecture of the library taps into the collective memory of the continent through the establishment of a new historical center for African consciousness in which knowledge, education, and sustenance are nurtured in the representation and intelligence of the continent.”

The architects explain that conceptually, the new building seeks to make visible the invisible knowledge of ancient and contemporary African history through both form and program. The new building references granaries — structures that allow for the extension of grain production and the systematization of cycles of feeding, planting, and harvesting — standing as a metaphor for knowledge-based nourishment.

The granary typology guides the overall building concept with eight cylindrical forms each topped with their own dome. These volumes take into consideration the solar orientation of light within the site to create a distinct atmosphere for each of the programs they contain. The chambers are connected through an ‘indoor den’ — a horizontal interstitial space that extends the entire length of the building to result in a new public space for the community.

By using local resources, such as mud for the building’s rammed earth façade and stone for the terrazzo floors, the project’s carbon footprint is reduced significantly. Through a site-specific understanding of the subtropical highland climate of Johannesburg, solar harvesting is utilized through rooftop photovoltaic panels. Meanwhile, geothermal heating and thickened walls harness the earth’s energy by storing heat during the day and releasing it at night to warm the building when temperatures drop.

“My vision for the new presidential library aims to encompass both an African past nd an African future,” says president Thabo Mbeki.

“It will be a place where Africans uncover their own history and identity. a place where we are empowered to script a brighter and more prosperous future.

“Through this wonderful collaboration with Sir David Adjaye and his team, I believe this building will become the epicentre for an African renaissance — a place of pride, celebration and future- forward thinking in which a strong sense of the African identity is empowered for further leadership in service to humanity.”