Kusile Power Station (formerly known as the Bravo Power Station) is the largest project in Southern Africa by value. It is estimated to cost R118 billion to complete.

The projec is a coal-fired power plant under construction by state electricity utility Eskom.

It is located about 15 kilometres north of the existing Kendal Power Station near Witbank, Mpumalanga.

Kusile Power Station is designed to consist of six 800 megawatt coal-fired generating units for a total generating capacity of 4,800 megawatts.This station would be the first in Eskom’s fleet with flue gas desulphurization technology.

Originally conceived as Project Alpha in 2007, with only three units planned to total 2400MW and estimated cost of R32 billion.

The boilers were envisaged to be supercritical in type, which would make them 38% more effective than other Eskom power stations.

An investment vehicle set up by two Russian groups (75% investment by Rail Standard Service and 25% by Fortland Consulting Company) and local partners proposed in 2017 a new 400,000 barrel per day refinery to be built in Namibe, Angola.

The planned complex will have a staged construction, with a refinery and rail link to be built in the first phase along with integrated infrastructure and followed by construction and management of a residential area and power plant.

The first phase will include the production of 28,000 barrels of refined oil within three and a half years and 364,000 barrels per day in the final phase within 11 years.

A JV was approved by the Angolan President the same year, with the government committing to buying 364,000 barrels per day of petrol and other fuels as production increases over an 11 year period. The project partners laid the first stone in July 2017.

The project is expected to start up in 2028.

Waterfall City is located in Gauteng, South Africa’s commercial hub.It is one of the largest projects in Southern Africa. This premier mixed-use development spans 800 000m² and features everything expected from a vibrant modern city, embracing new urban living by offering retail, offices, homes, hotels, a hospital, parks, dining, entertainment and more in one location.

The project is being developed by Attacq, one of South Africa’s leading property developers.

Angola International Airport is a major airport under construction near the Angolan capital of Luanda. The airport is designed for 13 million passengers per year and will receive 12 fingerdocks.

The site was selected in 2004. It is located 40 kilometers southeast of the city center in the Bom Jesus commune.It will be an alternative to existing Quatro de Fevereiro International Airport.

Chinese companies and the Brazilian company Odebrecht are constructing the airport. The first phase was completed in 2012.The originally scheduled 2015/2016 opening was delayed until 2022.

The total area of the airport is planned for at least 50 square-kilometers.

The project includes the construction of a rail link to the capital, to the province of Luanda and possibly to the neighboring province of Malanje. A road connection to Luanda requires that the existing road from Luanda to Malange is greatly expanded. The road is subject to frequent traffic jams.

This luxury private estate was first launched in 2015 by developers Douw Steyn and Giuseppe Plumari, and drew R6.5 billion in investment for infrastructure, which also went to supporting infrastructure for the greater region, including roads, water and sewerage.It is also one of the largest projects in Southern Africa

The 900 hectare estate is located between Fourways and Lanseria in Johannesburg, and is the largest estate in the country in terms of land size.

Over 1,000 residents already call the Steyn City home, and initial phases of residential developments are already completed, with new homeowners set to move in early next year.

Afurther R5.5 billion is being invested into the next phase of development, which will deliver a new ‘entirely pedestrianised’ city centre with luxury residential apartments, featuring basement parking and a network of sub-basement service tunnels for refuse.

The Laúca plant, which is considered to be the largest civil engineering project ever in the country and the second largest dam in Africa, will serve 8 million people, reaching the central provinces of Huambo and Bié this year.

The dam projected to produce 1,998 megawatts of energy with six turbines of 333 megawatts each in two plants, with the first turbine coming into operation in August 2017.

The work was financed by a Brazilian credit facility and in its various phases the project hired about 13,000 workers. Work began in 2012 with Brazilian group Odebrecht as contractor.

The hydroelectric project Caculo-Cabaça is located in São Pedro da Quilemba, 74 km from Dondo, Cuanza Norte. Financed by China, it is planned to generate 2,172 MW for allegedly allow access to electricity from 30% to 60% of the national population.

The construction of the plant started in August 2017 and will continue for the next 5 years approximately. The project was cleared in 2015 and got financing from the Chinese state bank ICBC, who posed the condition that it would be the Chinese consortium CGGC that would build it.

Located in the Mhondoro-Ngezi platinum belt, west of Harare, where Impala Platinum Holdings has operations, the project will include a coal mine and power station and should employ 15,000 people when fully implemented.

The mining project officially launched in 2018 will create Zimbabwe’s largest integrated platinum mining and refinery operation. President Emmerson Mnangagwa sees it as a flagship investment that underscores Harare’s readiness to open up to foreign investors.

Karo will open its first of four open pit mines in 2020 and at its peak expects to produce 1.4 million ounces of platinum, more than twice Zimbabwe’s current total output. The base and precious metal refineries will have capacity to toll refine another 600,000 ounces.

SADC Gateway, Port of Walvis Bay is completes the top ten list of largest projects in Southern Africa by value. The project includes the construction of a new container terminal on a 40Ha of land reclaimed from the sea, which is expected to lead to more and sustained trade between the South African Development Community and the rest of the world.

Situated on Africa’s western coast, the modernized and larger port will mean easier and much faster transit between Southern Africa, Europe, Asia, and the Americas. Expectations in the region are running high at the prospect of becoming a regional logistical hub.

Supported by a loan from the African Development Bank in 2013 of ZAR 2,982 million ( (about US $300 million), or 87.6 % of the costs, the Port of Walvis Bay’s new modern container terminal is expected to increase the container handling capacity from the current 355,000 twenty-foot equivalent units (TEUs) to up to 1,005,000 TEUs.

The construction of the new container terminal is due for completion in June 2019; work is already more than 85% complete on the expansion works, with ancillary activities to follow. The port will directly benefit the people, governments and private sector in Namibia, as well as the SADC region – particularly Angola, Botswana, Democratic Republic of the Congo, South Africa, Zambia, and Zimbabwe. 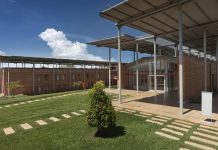 In Uganda, renewables are making the future brighter for many young patients 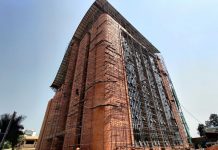 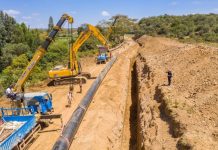