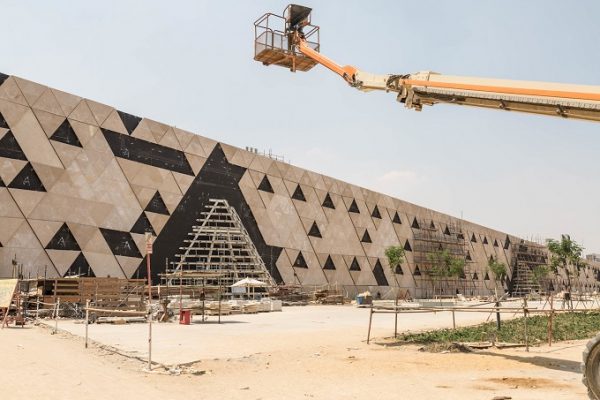 Around the world, there is a variety of small galleries and museums in the world that pay homage to cultural heritage, local artifacts, and world-class artwork.

Interestingly, several of them feature pyramid-shaped structures. Perhaps the most famous example is the glass pyramid built by American-Chinese architect I.M. Pei.

According to a feature on the Louvre Museum compiled by CN Traveler, the transparent structure is made up of 673 glass panels. On a much smaller scale, a guide to Malaysia’s National Art Gallery featured on Expat Bets describes how the gallery is difficult to get to but worth a visit.

It has a blue glass pyramid-shaped roof, evocative of Egypt’s beautiful structures.

The best architectural example to be built is probably the eagerly-anticipated Grand Egyptian Museum in Cairo, which was initially set to open by the end of this year. As of the end of 2019, it was already 94.5 percent completed according to the Egyptian Minister of Antiquities, Khaled al-Anani.

However, the events of the coronavirus pandemic have delayed the opening until 2021.

The stunning museum is estimated to be around 480,000 square meters, according to an article published by The Art Newspaper. The project has been many years in the making, with its undertaking being first announced in 1992. Designed by Heneghan Peng, images show that the exterior architecture of the museum echoes the Giza Pyramids, which are located nearby.

Triangular glass panels let the sunlight in through incredibly high ceilings, housing approximately 100,000 ancient Egyptian artifacts over the country’s rich history. It will feature items ranging from the pre-history period to the Greco-Roman period, with the Tutankhamun collection being the star attraction and museum centerpiece.

Approximately 5,400 objects from the young pharaoh’s tomb will be on view for the first time, to the delight of seasoned collectors and tourists alike. According to remarks by Anani quoted in CGTN Africa, “The most important pieces that the museum will include is the statue of King Ramses II in the lobby and statues of King Thutmose III, and Amenhotep III in the main exhibition halls.”

Unfortunately, the president of Egypt, Abdel Fattah El-Sisi, recently announced that all major national projects in the country will be postponed until 2021. In addition to this grand undertaking, the National Museum of Egyptian Civilisation being constructed in Cairo since 2004 has also been postponed until further notice.

It is hoped that with the rise of The Grand Egyptian Museum, tourism in Egypt will start increasing after the pandemic’s impact is lessened. Along with its historically significant artifacts, the compound is planned to host shops, dining options, a conference center, and cinemas.

It is expected to bring in approximately five million visitors a year.

With all of these developments in progress, Africa is clearly a continent to watch when it comes to prioritizing its culture and art.

In another novel venture, the head of the National Museum of Kenya announced that the country is planning to build an underwater museum at the site of a shipwreck at Ngomeni in order to attract tourists to the North Coast.

While there are also likely to be construction delays due to the virus, it will be exciting to see what emerges from these projects.