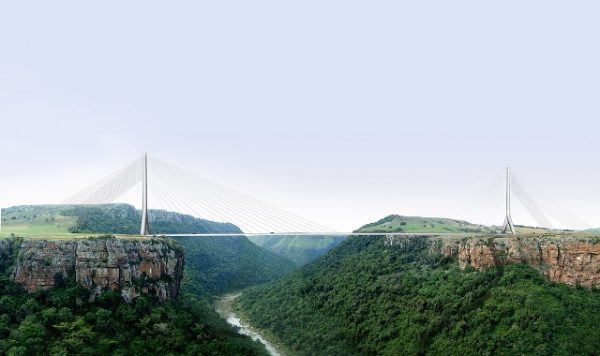 Construction of Msikaba bridge in South Africa which had temporarily stopped due to the coronavirus pandemic has resumed thanks to government decision to ease lockdown that has been in place since March.

Workers on the project are strictly observing social distancing, Concor Infrastructure and Mota Engil construction a joint venture tasked on the project has said.

The Msikaba Bridge will be South Africa’s longest cable-stayed type structure once complete.It will have a main span of 580m supported from a pair of 127m-tall pylons.

The deck will be 194m metres above the valley floor, making it the third highest bridge in Africa, eclipsed only by the existing Bloukrans Bridge with a height of 216m and the Mtentu Bridge which, when completed, will be 223m high.

The bridge over the Msikaba Gorge near Lusikisiki in the Eastern Cape forms part of the N2 Wild Coast project being undertaken by the South African National Roads Agency Limited (Sanral).

Also being built as part of the N2 Wild Coast Toll Road project is the Mtentu Bridge. Once the new route is complete, it will cut the driving distance by some 85km.

The balance of works contained in the contract includes construction of 1.5 km of approach roadworks on either side of the bridge.

The three-kilometre-long suspension bridge, which extends 680 metres over Maputo Bay, has been lauded as a Southern Africa’s latest and greatest engineering feat.

The bridge  which is now among the 60 largest suspended spans in the world, aims to link the capital Maputo with the small and picturesque town of Catembe on the southern edge of Maputo Bay.