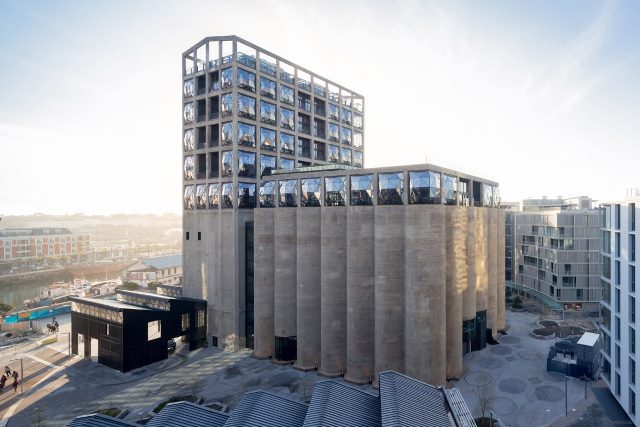 A symbolic grain silo complex in Cape Town that was transformed to a museum by British Architect Thomas Heatherwick, has been recognised as the best building in the Middle East and Africa.

Zeitz Mocaa was one of the buildings that were feted by the Council of Tall Buildings and Urban Habitat( CTBUH).

Built in the 1920s, the building features an expansive atrium, a series of unique geometric windows, and 80 separate galleries. Designed to adequately reflects its history and surroundings, it’s designer hopes it will open the door for many more buildings of its kind.

The top portion of the taller building was transformed into a luxury hotel, while the bottom portion of the elevator building and the storage annex would become Africa’s first international museum dedicated to contemporary African art.

From the outside, the greatest visible change to the original structure is the addition of glass windows inserted into the geometry, which by night transform the building into a glowing beacon on Table Bay.

A hotel in Singapore took the overall prize as the best tall building in the world. The Oasia Hotel is clad with 54 kinds of climbing plant giving it a visually-striking look.

Antony Wood, the director of CTBUH said that the building’s commitment to communal space makes it standout.

“This project won not only because it incorporates 60 storeys of green walls along the exterior, but because of its significant commitment to communal space. The tower has given over 40% of its volume to open air communal terraces in the sky,”he said.