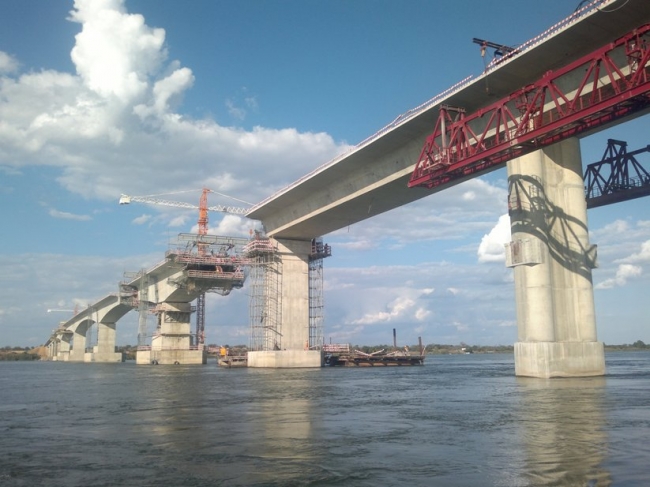 A recent report by Research firm AidData shows that the Maputo-Catembe bridge in Mozambique is the biggest recipient of Chinese funds compared to other construction projects in the country.

The report dubbed ‘Official Chinese Funding for Africa’ reveals that while the project construction cost is estimated to be US$725 million, 95% was covered by a loan granted by the Export Imports Bank of China.

At the moment, the only way across Maputo Bay, a 90km inlet of the Indian Ocean, is by ferry.

The last section of deck of the bridge between Maputo and Catembe was laid in late October.

The 3km bridge aims to link the capital Maputo with the small and picturesque town of Catembe on the southern edge of Maputo Bay.

In October, China Road and Bridge Corporation placed the first module of the 57 that will make up the main deck of the bridge.

The deck, which will cover a 600-metre suspension span, is estimated to weigh more than 7,000 tonnes. Each module is 12 metres wide, 26 metres long and 3 metres thick.

Construction of the bridge is part of the Maputo-Ponta de Ouro road construction project, over a distance of 209 kilometres.

The project is divided into three parts – the first section from Maputo to Katembe, over 35 kilometres; the second section comprising Katembe-Ponta de Ouro (109 kilometres) and includes the repair/construction of roads between Katembe/Bela Vista and Bela Vista/South Africa and the third section of 63 kilometres covering the repair of the Bela Vista/Boane road.

This project is budgeted at US$725 million, and its financing was secured through a loan from Mozambique from the Export-Import Bank (ExIm) of China.

Chinese funds have also been used in the repair the Beira-Machipanda road.