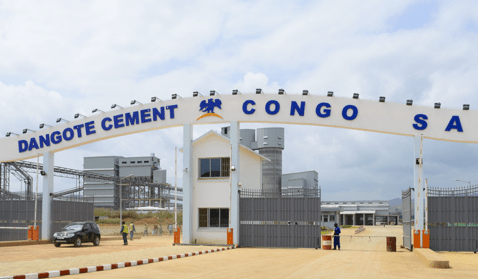 “We have observed Dangote Cement’s operation elsewhere on the continent and how it has helped boost economies by sparking off other allied industries we hope that Congo situation would not be an exception,” he said.

The commissioning of the Mfila cement plant in Congo Brazzaville comes at a time when total government revenues have plummeted by 31.3 percent and revenues from the oil sector have fallen 65.1 percent since 2015 due to a slide in global crude prices.

Dangote Cement total production capacity across Africa at the end of May 2017, stood at 45.8 million metric tonnes per annum. The company has opened production plants in Ethiopia, Tanzania, Zambia and Cameroon.

“It is envisaged that this will contribute substantially to the availability and affordability of cement in the country and the Republic of the Congo will no longer need to depend on imports to bridge the gap between demand and supply.

“It is our hope that the inauguration of the plant will boost Congo’s economy, conserve foreign exchange that would otherwise have been spent on imports for the country, and create employment opportunities down the value chain,” he said.

The 1.5mtpa capacity Mfila cement plant in Congo Brazzaville that has been constructed at a cost of US$300m is set to be the biggest in in the country.

Cement consumption in Kenya fall in first half of 2017