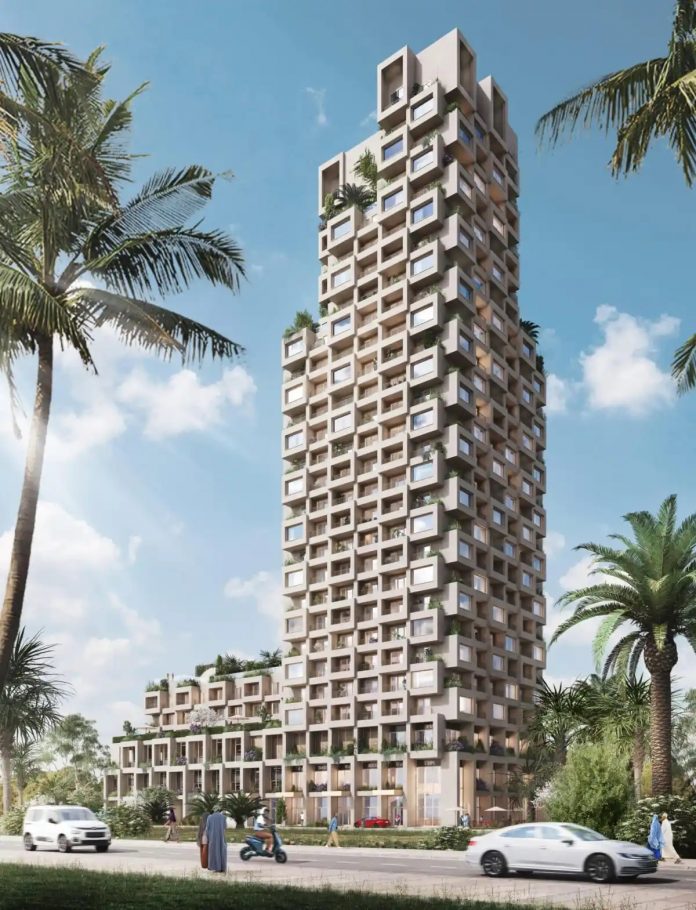 The Indian Ocean island of Zanzibar is planning the tallest timber apartment in the world, a 28-storey apartment tower designed in hybrid timber technology.

Dubbed “vertical green village”, it would represent an iconic landmark not only for the island but for the whole of Africa and a global environmental milestone, being the first timber structure worldwide of such proportions. The design of the mixed-use apartment and commercial building, in a playful beehive style with breathtaking ocean views, was unveiled to the public in Muscat, Oman on 1 October. Dutch-born architect Leander Moons, responsible for the concept, said: “Burj Zanzibar is not just an outstanding building but a new ecosystem for the future of living”.

The residential tower with 266 residences is to be located in Fumba Town, East Africa’s pioneering eco-town developed by German-led engineering firm CPS. Categorised as a strategic investment and fully supported by the Zanzibar government, the growing city near the capital, where foreigners are allowed to buy, stretches along a 1.5-kilometre seashore on the southwest coast.

“Burj Zanzibar will be the highlight and natural continuation of our efforts to provide sustainable housing in Africa, thereby empowering local employment and businesses”, elaborated CPS CEO Sebastian Dietzold in Muscat.

With turquoise seas, white sandy beaches and a UNESCO-protected historic Stone Town, Zanzibar recorded 15% annual growth in tourism in recent years and 6.8% economic growth. Earlier this year, the semi-autonomous archipelago, 35 kilometres off the coast of Tanzania, stretched its wings also into another direction, launching an initiative to attract African tech companies with a total worth of six billion dollars.

Timber is the oldest building material in the world. As timber technology, it currently enjoys a renaissance because of its environmental benefits and longevity. New timber products such as cross-laminated timber (CLT) and glulam are considered the building material of the future. One cubic metre of wood binds half a ton of carbon dioxide, whereas conventional concrete construction is responsible for 25% of CO2 emissions.

Once realised, Burj Zanzibar would be the highest timber building in the world and Africa’s first high-rise ever in this innovative technology. A few weeks ago the 86.6-metre Ascent Tower in Milwaukee, US, was certified as the world’s tallest timber hybrid building by the Council on Tall Buildings and Urban Habitat (CTBUH).  Africa’s highest conventional skyscraper is a 385-metre office tower named “Iconic Tower” in Egypt, still under construction.

Consortium of specialists from New York to Switzerland

Burj Zanzibar is planned as a hybrid timber tower.  A steel-reinforced concrete core is designed to meet all required fire and life safety standards. The project is to be executed by a consortium of leading specialists from Switzerland, Austria, Germany, South Africa, Tanzania and the US. Green roof gardens and planted balconies further reduce the carbon footprint of the building. “Burj Zanzibar will be a widely visible new landmark for Zanzibar and beyond, not only because of its appearance but because of its construction method”, said architect Leander Moons during the launch event.

Set to promote locally available wood as a building material, Tanzania and its vast land resources for agroforestry would also benefit from the ambitious green mega tower. A large forest development in central Tanzania near Iringa already covers twice the size of New York; “an enlarged forest industry could create hundreds of thousands of jobs in the East African country”, said CPS Director Dietzold.

The playful architectural style – reminiscent of a beehive with honeycombs – combines modern urban trends with local culture. “Panorama windows, closed-in green loggias and a modular layout will enhance the green nature of the tower and allow for flexible apartment floor plans, tailor-made for any cultural preferences”, explained lead architect Moons. Residents can have their outdoor garden even on the top floor.

Representing a young, vibrant and most of all sustainable lifestyle, the building allocates a mix of studio, one- and two-bedroom apartments and deluxe penthouses.

The elegant tower stands on a terraced podium with shared and private gardens , shops and a common pool. Sizes of units range from studios starting at $79,900 to a vast penthouse with a private pool on the 26th  floor at $950,880. “As a global architectural highlight the Burj Zanzibar will be setting a new benchmark of building in the 21st century”, CPS director Sebastian Dietzold concluded.