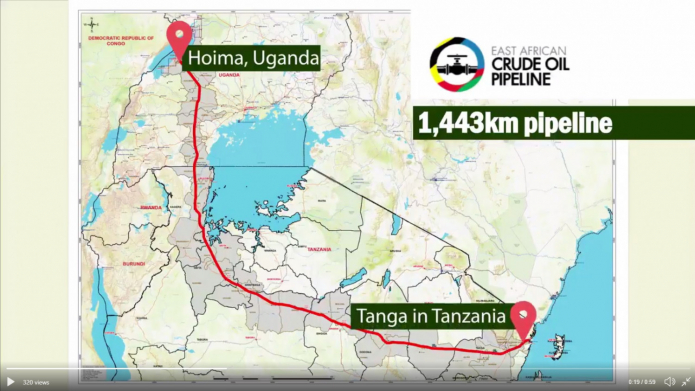 The European Union has condemned the planned East Africa Crude Oil Pipeline over what is says is “serious concern about the human rights violations in Uganda and Tanzania linked to investments in fossil-fuel projects.”

In adopting a resolution to oppose the project, the EU parliament said that the human rights violations includes;  wrongful imprisonment of human rights defenders, the arbitrary suspension of NGOs, arbitrary prison sentences and the eviction of hundreds of people from their land without fair and adequate compensation among others.

Stretching for nearly 1,445 kilometers- from Lake Albert and Murchison Falls National Park in Uganda to the port of Tanga in Tanzania- the pipeline threatens to displace thousands of families and farmers from their land and would pose significant risks to water resources and wetlands – including the Lake Victoria basin, which over 40 million people rely upon for drinking water and food production.

The project is being spearheaded by French multinational oil company TotalEnergies (Total) as the main investor, together with the China National Offshore Oil Corporation, the Uganda National Oil Company, and the Tanzania Petroleum Development Corporation.

And now, the European parliament has summoned TotalEnergies chief executive Patrick Pouyanné to Brussels to justify the project that the lawmakers denounced last week.

He will appear before the parliamentary Committee on Environment, Food and Natural Resources, as well as that of Human Rights. The outcome will determine how the company navigates this latest crisis.

The EU resolution is the latest hurdle that TotalEnergies faces as opposition against its oil project mounts.

In April this year, Allianz, one of the world’s largest oil and gas insurers, withdrew from the project. The global insurer said;

“Allianz is not providing direct insurance to the East African Crude Oil Pipeline project, as it neither meets our climate ambition nor falls within our ESG risk profile.”

Last year, Barclays and Credit Suisse declared they will not provide financing for the construction of the world’s biggest heated crude oil pipeline proposed by French oil company Total and the China National Offshore Oil Corporation.

In a statement Barclays said;

“We do not not intend to participate in the financing of the East African Crude Oil Pipeline project,” Credit Suisse also confirmed it “is not considering participating in the EACOP project.”

A major offensive against the project has also come from environmentalists and human rights activists.

Greenpeace Africa for instance says that EACOP does not promote the idea of green energy.

“Oil companies are desperately clinging onto a dying industry. They clearly have vested interests in keeping their pockets lined. Communities in East Africa are not interested in dirty, outdated, fossil-fuels,” said Senior Political Advisor, Fredrick Njehu.

“The crude oil pipeline will threaten water resources, biodiversity and Uganda’s oldest and largest nature reserve, the Murchison Falls National Park, which would be opened up to large-scale oil extraction at a time when the world is acting to urgently reduce its reliance on fossil fuels,” he added.

The crude oil project first faced a major problem in 2020 when four non-governmental organisations mounted a legal challenge seeking to stop work on the project.

The Centre for Food and Adequate Living Rights Ltd and the Africa Institute for Energy Governance both based in Kampala; the Nairobi-based Natural Justice-Kenya and the Center for Strategic Litigation Ltd based in Zanzibar requested the court to temporarily stop the project construction until the case is heard and determined.

Environmentalists argue that the pipeline which would run through numerous sensitive biodiversity hotspots, risks significantly degrading several nature reserves crucial to the preservation of threatened elephant, lion and chimpanzee species.