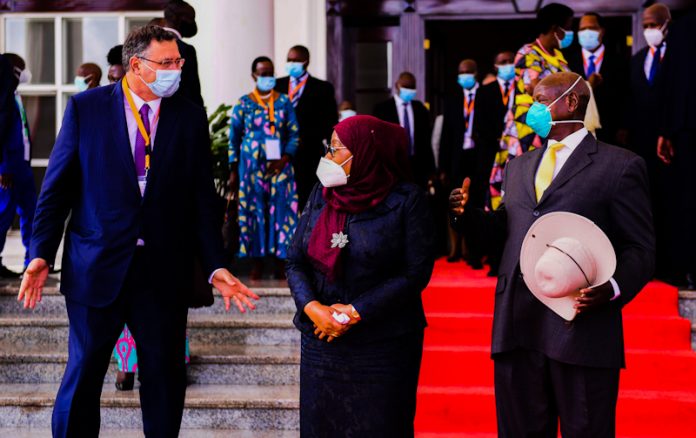 Uganda, Tanzania and the French oil company Total, along with its investment partner in Uganda, the China National Offshore Oil Corporation (CNOOC), signed a series of agreements on Sunday to build a heated pipeline that will carry crude oil from western Uganda to the Indian Ocean coast.

“Oil companies are desperately clinging onto a dying industry. They clearly have vested interests in keeping their pockets lined. Communities in East Africa are not interested in dirty, outdated, fossil-fuels,” said Njehu.

“The crude oil pipeline will threaten water resources, biodiversity and Uganda’s oldest and largest nature reserve, the Murchison Falls National Park, which would be opened up to large-scale oil extraction at a time when the world is acting to urgently reduce its reliance on fossil fuels. The project will also have severe impacts on local communities rights.

“No matter how you look at it, oil is highly risky and has significant potential to damage the environment and put surrounding communities in peril. East Africa has some of the best renewable energy resources in the world, and these resources should be maximised as governments shift away from fossil fuels in a people-centred just transition.

“Contrary to what proponents argue, the EACOP will not “unlock East Africa’s potential”.

East Africa, he said ,needs energy security based on widespread rollout of renewables and the millions of clean jobs that come with it, and it needs to protect its natural heritage. African governments must prioritise innovative and just solutions for energy and not fall into neo-colonial projects that have vast environmental and climate risks.