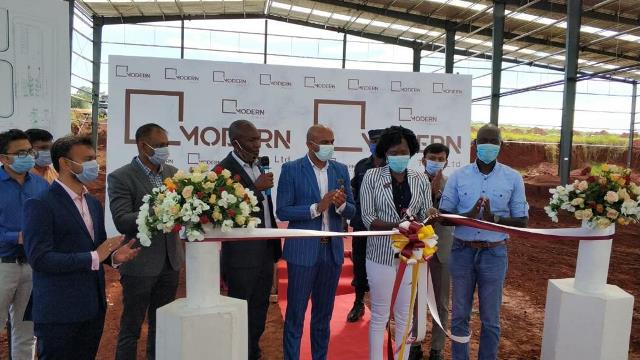 Construction is underway on what is expected to be one of the largest modern tiles factory in Uganda.

The Modern Tiles Ltd factory which being built in Njeru Municipality, Buikwe District was launched recently by State minister for Investment and Privatization Evelyn Anite.

Speaking while presiding over the launch of the project, Anite said that the tile factory in Uganda will get the necessary support from the government to thrive.

“We would like to see the company’s success, especially through the Buy Uganda Build Uganda (BUBU) Campaign aimed at supporting the growth of locally manufactured products,” said Anita

Modern Tiles will also benefit from regional East African Community and the Common Market for Eastern and Southern Africa (COMESA), as well as the US, European and Chinese markets, she noted.

The plant will have a daily production capacity of 40,000 Square Meters once complete.

Ashish Mompara, the proprietor of Modern Tiles Ltd observed that  they not only intend to sell in the local market but also export to East Africa, the Middle East and also the European Market.

“We expect Uganda to generate good foreign exchange,” he said.