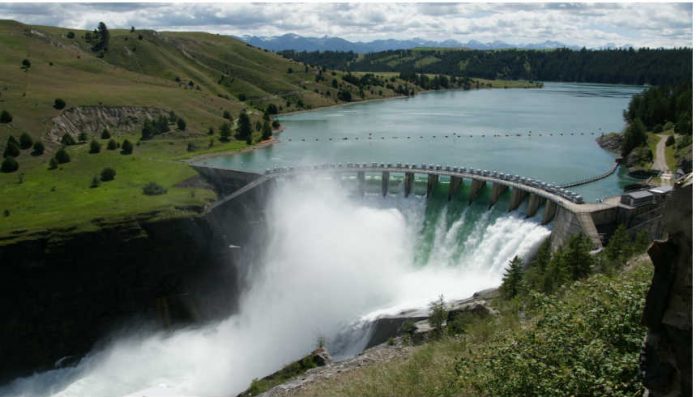 Seven years ago the Democratic Republic of Congo (DRC) proposed the Inga 3 – a 4.8GW hydropower project on the Congo River – with great fanfare.

Third in a series of dams that would form the Grand Inga complex on the Congo river, the project was touted as a solution to southern Africa’s energy deficit woes and a way for the DRC to participate in regional economic development.

Seven years later, development of Inga 3 has yet to begin. The project continues to be stymied by conflicts. For example, earlier this year, one of the partners, a Spanish company, pulled out of the consortium. But DRC president Félix Tshisekedi continues to push to revive the plans.

According to South Africa’s Integrated Resource Plan (IRP 2019), the country plans to import at least 2.5GW of electric power from Inga 3 (or more than half of the original 4.8GW design), a commitment reiterated recently by South African president Cyril Ramaphosa. The largest remaining fractions of Inga 3’s electricity generation would be purchased by the mining industry in the DRC. Less than 10% of the electricity from Inga 3 is expected to supply the DRC’s residential electricity needs. Currently 90% of the population in the DRC lacks electricity access.

We set out to answer this question in our research paper. We concluded that pursuing large hydropower dams in the DRC is financially risky for South Africa. We assessed the feasibility and cost-effectiveness of renewable energy alternatives to Inga 3 to serve the energy needs of both the host country, the DRC, and the main buyer, South Africa.

The hydropower potential at the Grand Inga site on the Congo River, the largest remaining untapped hydropower potential in the world, has drawn the interest and attention of development banks and regional governments for the past several decades. But there’s been dramatic change in the energy sector in the past five years. In particular, the cost of alternative energy sources like wind and solar has changed the game for cost-competitive and sustainable energy generation that can be rapidly scaled up.

There are more efficient ways to address severe energy deficits quickly and cost-efficiently. For example, wind projects take only one to three years to build and most solar photovoltaic projects take a year. Both incur lower costs than similar-sized hydropower projects, which take five to 10 years to build. The latest construction time estimate for the Inga 3 is eight years.

Longer build times lead to greater costs due to interest on capital. And analysis of data from past large hydropower dams shows that these projects cost twice the amount they quoted before the start of the project.

We found that, even without considering the large environmental and social impacts, the dam is an unsound investment based on plain economics.

In our study we compared alternative energy sources for South Africa, the largest potential buyer of Inga 3 electricity.

We found that a mix of wind, solar photovoltaics, and some natural gas would be more cost-effective than Inga 3 to meet future demand.

We reached this conclusion after examining the impact of several uncertain factors that could change overall costs. These included: Inga 3 performance, Inga 3 cost overruns, wind and solar performance, and the demand for electricity in the future.

The only scenarios in which Inga 3 was more cost-effective were those that assumed significantly lower than average wind energy performance.

In the case of the DRC, we found that wind and solar generated electricity would be cheaper than the World Bank-estimated price of electricity from Inga 3 for both retail customers in Kinshasa and mining customers in the Katanga province.

These renewable energy technologies are more suitable for providing decentralised and off-grid access to electricity to DRC’s geographically dispersed population.

The DRC has since proposed to more than double the initial capacity examined in our study. This would obviously change the economics described here, though President Tshisekedi has expressed preference for the original smaller 4.8GW proposal.

Of course, economics should be only one of many factors to weigh when choosing energy technologies. Like many other mega hydropower projects, the Inga 3 has been fraught with potential severe social and environmental impacts. At least 35,000 people would be displaced by Inga 3 alone.

The potential ecosystem impacts include the decline of fisheries upstream of the dam, threats to freshwater diversity and mangroves in the Congo delta, and reduced carbon sequestration through reduced organic sediment transport downstream to the ocean.

Time and resources wasted over the last decade entertaining a high-risk mega project that may not even be realised could have been fruitfully spent pursuing opportunities like wind and solar technologies that are cost-effective today.