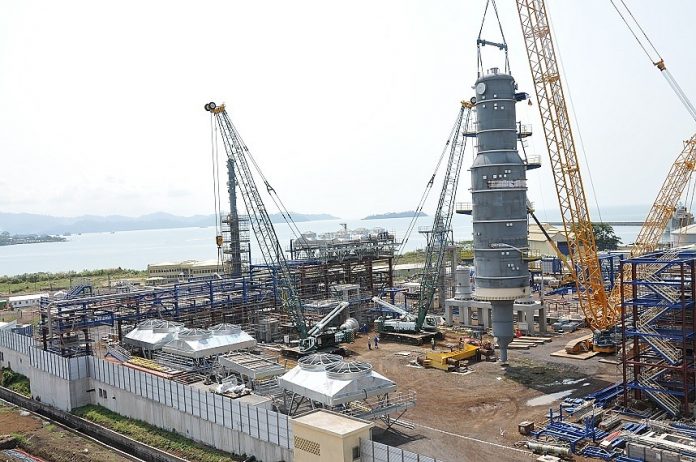 This is the largest and most expensive project under construction in Cameroon.The project involves the construction and modernisation a mega refinery plant in Limbe.

It is being spearheaded by a consortium of French firms Suez SA, Sogea Satom, and Ingenica who are providing technology licensing, engineering, and construction services on the  2.1 million-tonne/year Sonara refinery in Limbe.

Though the volume of this anticipated production increase has not been revealed, it is expected that after the completion of both phases of the expansion and modernisation works at Sonara, yearly production of this refinery should increase by about 1.4-million tons. The first phase will cost $0.47 billion to construct.

It is a 355 km-long pipeline in under construction in Cameroon.  The first 110 km section which will connect Limbé, in the Southwest, to Douala, in the littoral. After the Douala-Limbé section, the 3PL consortium heading the project will build another section linking Douala to Edéa, and covering 70 Km, which will followed by one between Edéa and Yaoundé a bit longer (175 km).

Funds for this project will be provided by a set of investors from Korea, Switzerland, China, Russia, Nigeria, etc. which will invest 30% of the capital; the rest will be borrowed from banks. The project will cost $0.35 billion to construct.

The Olembe sports complex involves the construction of an ultramodern recreation facility in Younde. Construction started in earnest in 2019 when main contractor Magil transported  the first contingent of equipment to the site.

The prject will include construction of Paul Biya stadium with a capacity of 60,000 seats (all covered), two training stadiums, with 1,000 seats each, a gymnasium, handball, basketball, volleyball, tennis, an Olympic swimming pool, a 5 star hotel with 70 rooms, a shopping mall, a museum and a cinema.

The Paul Biya Stadium, named after President Paul Biya, is currently under construction on a surface area of 34 hectares (84 acres) in the Olembe neighborhood in Yaounde, some 13 km (8.1 mi) from the city center. The project is estimated to cost $0.28 billion to construct.

Also appearing on the to 5 mega construction projects in Cameroon is the Japoma Stadium. Also known as Stade omnisport de Douala (official name), the project will be located in the Japoma locality in Douala. It will be a 50,000-capacity all-seater stadium which also will have basketball courts, handball volleyball and tennis courts, an olympic swimming pool of 8 lanes, conference centres, commercial centers, a four star luxury hotel and a parking lot. The stadium will be mostly used for football but it will also have an athletic track.

The Japoma Stadium is expected to cost around $143 million with 75 percent of the project financed by the Türk Eximbank.

It will also host some matches during the 2021 Africa Cup of Nations.

The Douala Grand Mall is a commercial center with 18 000 Sqm of lettable area. It embodies a multiplex of 5 cinemas of 1000 seats, a Carrefour Supermarket, 160 shops and stores, 22 restaurants, a spa, 640 parking places on the first phase. The second phase, the Business Park, will be having a five-star hotel and offices. The project dubbed “The Douala Grand Mall and Business Park” is a grade-A mixed use infrastructure, developed by Actis in the local subsidiary “Douala Retail and Convention Centre”, DRCC. Expected to cost $0.20 billion,The Douala Grand Mall  is also among 5 mega construction projects in Cameroon.