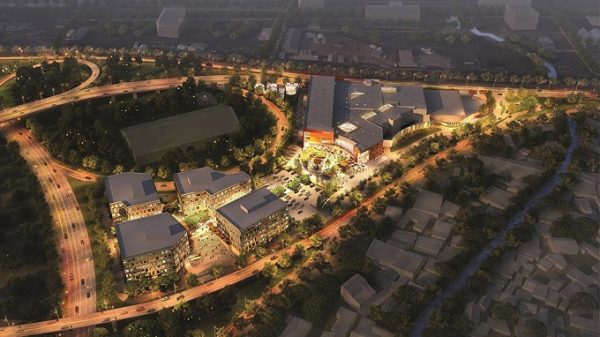 Construction of Douala Grand Mall in Cameroon has received a shot in the arm after its developer was awarded  US$33.65 million to support its construction.

The funds were provided by Proparco, a subsidiary of Agence Française de Développement (AFD) which focuses on private sector development and Société Générale Cameroun.

The Douala Grand Mall is a commercial center with 18 000 Sqm of lettable area.

Developed by Actis, a leading growth market investor and local partner Craft Development, the mall embodies a multiplex of 5 cinemas of 1000 seats, a Carrefour Supermarket, 160 shops and stores, 22 restaurants, a spa, 640 parking places on the first phase. The second phase, the Business Park, will be having a five-star hotel and offices.

The project dubbed “The Douala Grand Mall and Business Park” is a grade-A mixed use infrastructure, developed by Actis in the local subsidiary “Douala Retail and Convention Centre DRCC.”

Occupying one of the most strategic sites in the Economic Capital of Cameroon, the Douala Grand Mall is located at the immediate vicinity of the International Airport. With a catchment area of more than 4 million inhabitants and a full accessibility for all socio-economic groups. 300 000 visitors per month are expected at the Mall.

With an extensive offer in fashion and beauty, lifestyle, services (telecom, banking, insurance, pharmacy, car wash, optical eyewear, etc.), entertainment and dining, the Douala Grand Mall will be the first destination shopping center in Cameroon, and the largest shopping Mall in Central Africa.

Actis has opted for an EDGE certification process, which will increase the energy efficiency of the shopping center. In addition, a wastewater treatment unit is being built in the complex and Actis has paid particular attention to local supply for the construction, by using 25% of local materials.

“The Mall will be c.30% more energy efficient and c.50% more water efficient than other buildings in the market, through measures such as using reflective paint and tiles on the roof; installing faucet aerators and water efficient bathroom fixtures,” Actis says.

DGM is the first phase of a Business Park project that should eventually include a five-star hotel and offices.