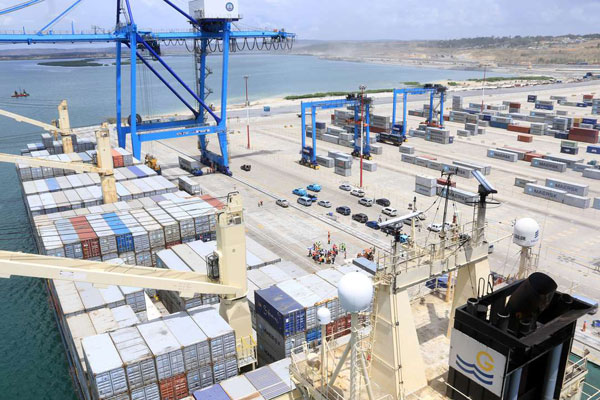 He spoke during a tour at the Port of Mombasa to witness the progress of the ongoing construction of the second phase of the Second Container Terminal.

“Normally in the maritime sector the one Million TEUs is very high threshold and I am happy to note that almost four months before the close of the year we have attained it. Going by our daily handling of between 3500 TEUs and 4000 TEUs simple arithmetic tells us that we might even surpass 1.4 million TEUs,” said Dr. Manduku.

He expressed satisfaction with the performance at the Nairobi Inland Container Depot saying it has continued to record high efficiency levels.

“A year ago the cargo dwell time at the container depot was 23 days. Today I am happy to note that 80 percent of all cargo is leaving the Inland Container Depot within four days and our average dwell time has gone down to below six days. This is because of the efforts by both Government agencies and private sector in ensuring that we make business smooth and efficient.”

In terms of cargo evacuation from the Port of Mombasa to the Inland Container Depot Nairobi by the Standard Gauge Railway (SGR), Dr. Manduku said currently there’s an average of 8 to 10 trains each carrying 108 containers daily.