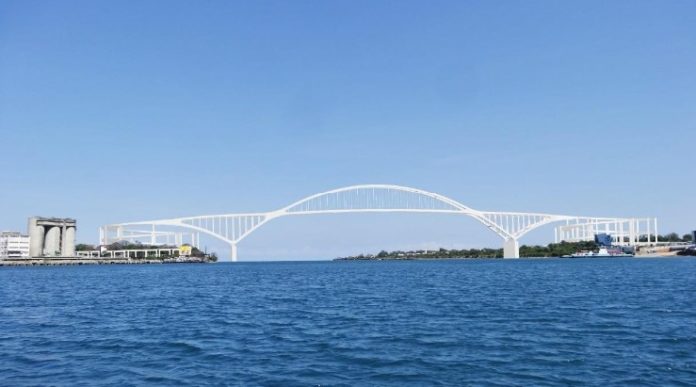 Kenya’s plan to construct a major bridge across the Likoni channel to link the island to the South Coast has inched closer to becoming a reality following the completion of a feasibility study.

The move now paves the way for actual construction to begin for the Mombasa Gate Bridge project aimed at easing traffic regularly experienced in the area. According to an officer handling the project construction of the project will take four years.

“Environmental and social assessment, which has begun, will take about three years and then pave the way for actual construction works,” said project consultant Michael Mwangi.

The Sh80 billion bridge will start on Lumumba Road, near Jela Baridi Prison, Majengo. It will then cross the railway station and Moi Avenue along Archbishop Makarios Road, cross the Likoni Channel at Mwenza Creek and then join the Southern By-pass at Ziwani through the Mtongwe road.

The Mombasa Gate Bridge will offer an alternative passage to the Likoni Ferry, operated by the Kenya Ferry Service that is currently the only available crossing between Mombasa Island and the South Coast.

The ferry experiences congestion with estimates giving an average of 300,000 persons and 6,000 vehicles crossing per day.

Plans to construct a bridge across the channel has been o the offing for years but implementation of the project has been met with several challenges key among them financial constraint.

A preliminary study carried out between October 2014 and March 2015 by Katahira & Engineers in conjunction with Oriental Consultants, Nippon Steel & Sumitomo Metal Corporation and Toyo Construction recommended the construction of a permanent bridge with spiral ramps at both ends.

The design work of the bridge was co-financed by Kenyan government and the Japan International Cooperation Agency (JICA).

Kenya believes that a permanent crossing would facilitate movement of goods and people between the Island and South Coast and beyond to Tanzania, reduce conflict between docking ships and ferries, de-congest the island and enhance the capacity of the port of Mombasa by providing an alternative access.
1USD is equivalent to 103 Kenya shillings
ADVERTISEMENT