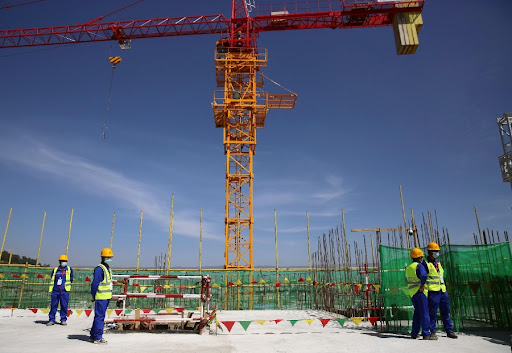 TThe African Union (AU) Commission on Friday marked structural completion of the main building of the China-aided future headquarters of the Africa Centers for Disease Control and Prevention.

The topping out ceremony, which took place on November 26, 2021, marked the completion of the primary structure of the construction project.

Construction of the headquarters began in December 2020 with the project completion scheduled in 24 months. The headquarters rest over a total of nearly 40,000 square meters of construction area. It will house laboratories, emergency operation centre, offices and other facilities when completed.

The laboratories on HQ will receive samples from across the continent, which is said to be a major step for the health emergency response of the continent.

Within a construction period of less than a year, 45 percent the project is completed consuming USD20 million out of the total budget of USD100 million. The project is fully funded by the government of china.

During the ceremony, head of China’s Mission to the African Union, Ambassador Liu Yuxi praised the partnership between China and the AU. He added “all countries need to cooperate with Africa on the basis of respecting Africa’s sovereignty.”

According to Dr. Benjamin Djoudalbaye, Head of Policy, Health Diplomacy and Communication at Africa CDC, the completion of the HQ will play a significant role in the continent’s health emergency response. “The continent encounters more than 100 public health scenarios every year. These can be degenerated from epidemic to pandemic. Having this center would help manage, monitor and respond to health events in the continent in a timely manner,” Dr. Benjamin said.

The implementation agreement on the Africa CDC HQs building project was signed in July 2020 between the AU Commission and the Ministry of Commerce of the People’s Republic of China. In a speech delivered by Commissioner for Humanitarian Affairs and Social Development of the AU, Amira El Fadil Mohammed, the AU appreciates China’s efforts.

The headquarters in Addis Ababa will be finalized by early 2023. Africa CDC has a plan of building additional five Regional Collaborating Centers in Egypt, Gabon, Kenya, Nigeria, and Zambia in the near future.