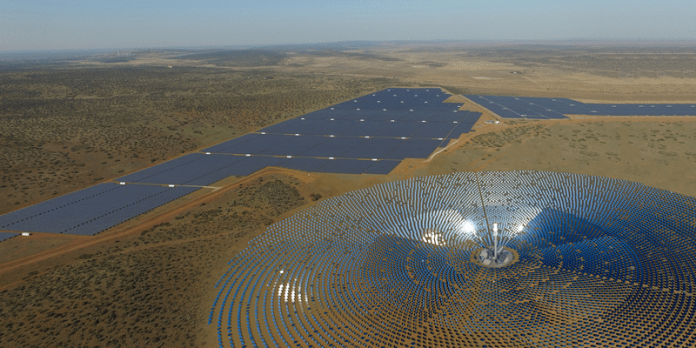 The project will provide 200,000 South African households with clean and reliable energy and help to offset approximately 480,000 tons of carbon per year – equivalent to the per capita emissions of 67,000 South Africans.

This investment marks CDC’s re-entry into the South African market in direct investment.

CDC, AfDB, FMO, DEG and DBSA have partnered to invest in the Redstone project, which is developed and led by ACWA Power – a top tier global power developer and leader in CSP.

Investments from DFIs has had a demonstration effect which has enabled participation from commercial investors, including ABSA, Investec, Nedbank and Sanlam.

Also invested in the project is Pele Green Energy, the Government-owned Central Energy Fund, and a Community Trust aimed at benefitting the immediate area of the project.

The lender partnership has resulted in an investment of approximately US $800 million in the Redstone Project, making it one of the largest project finance deals ever done in South Africa.

The 100MW project has a 12-hour full-load energy storage capacity which allows for storage of heat energy harvested from the sun.

Along with other CSPs totalling 500MW, Redstone will offset some of South Africa’s diesel generation by providing stable and clean energy, and less expensive power generation across the country.

Redstone’s ability to convert solar power into baseload energy at scale, aligns with CDC’s climate change strategy of investing for clean and inclusive growth. CDC’s investment in the project will support South Africa’s drive to increase its renewable energy supply and help to reduce the country’s dependence on coal fuel supply and high carbon footprint.

Iain Macaulay, Head of Project Finance at CDC Group, said:“Our investment in the Redstone project signals CDC’s re-entry into the South Africa market on the direct debt side, through a project that uses pioneering technology that will positively transform the country’s energy landscape.

On this investment, we have collaborated with investors that can help close the funding gap and deliver sustainable climate infrastructure, to bring reliable and affordable clean power to South Africa.

Moreover, the project’s delivery of impact at scale will serve as proof point to commercial investors looking to back future new climate-smart technologies that can support the energy needs of more countries.”

“CDC remains steadfast in our ambition to accelerate investments in renewable power, ensuring greater opportunities for the communities and people in our markets. Our investment in Redstone represents our continued objective to support frontier markets in making a just energy transition and back meaningful mitigating action aimed at reducing greenhouse gas emissions.”

Redstone was procured under the 2011 Renewable Energy Independent Procurement Program (REIPPP), launched by the government of South Africa and it has delivered 102 renewable IPPs totalling 6,400MW, since 2012.

KONE to equip the tallest building in Africa