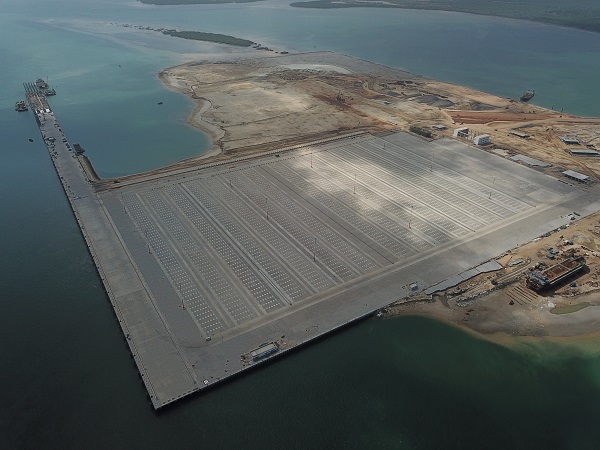 Newly constructed Lamu port project has officially been opened by president Uhuru Kenyatta with the target to link Kenya to South Sudan, Ethiopia and the middle belt of Africa.

Two other berths are expected to be launched before the end of the year.

The proposed port site at Manda bayat 40o 55′ East and 2o 11′ South was selected because it has deep and sheltered bay and a wide navigable entrance channel. Hydraulic and geotechnical surveys have confirmed that the area is suitable for port construction. The 10Km shore length has the capacity to accommodate up to Twenty Three (23) berths.

Associated infrastructures required will be the connection of Lamu to the main electricity grid from Hindi, increase of portable water supply within the region and upgrading of access roads.

The facilities at Lamu port once complete will lead to creation of substantial job opportunities that covers not only direct jobs related to the Port operation but also indirect jobs of all fields (Agriculture, fishery, manufacturing, logistics, transport, trade, commerce, etc.)

The new access and links with neighboring countries created by the LAPSSET corridor will foster regional economic development and growth through trade facilitation. This will in turn lead to further creation of substantial job opportunities and increased income in the area of value addition especially on processing of agricultural products and cash-crop exports.

The alternative destinations created by development of Resort Cities in Lamu, Isiolo and Turkana are expected to increase international tourist arrivals and push up the foreign exchange earnings.

The opening of the Northern part of Kenya will not only pave way for exploiting the existing natural resources like oil and coal, but will also encourage the exploration of new finds.

It is expected that the port of Lamu would attract some of the cargo which would traditionally pass through the ports of Sudan, Djibouti and Mombasa. The traffic forecast for this corridor predicts that in that inclusive of demand from both South Sudan and Ethiopia, the Lamu traffic is expected to reach 23.9 million tons by 2030.