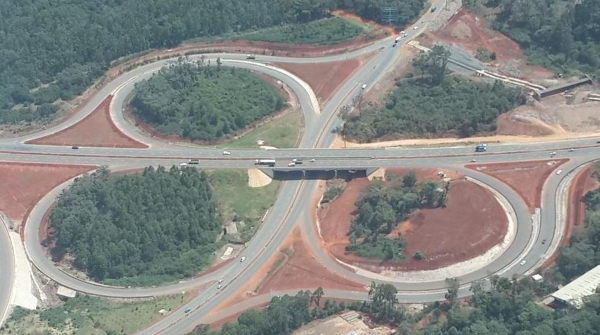 In mid-July the government launched tenders for the construction of a KSh33bn ($319.6m) highway through central Kenya.

The 84-km dual carriageway, the country’s second-most-expensive road project after the Thika Superhighway, will connect the town of Kenol in Murang’a County with Marua in Nyeri County, via Sagana.

Funded by a loan from the African Development Bank, the road will also form part of the bank’s 800-km “Great North Road” project connecting Kenya’s port city of Mombasa with Addis Ababa in Ethiopia.

Officials have said that they expect construction to begin early next year and take around three years to complete.

Later on in July it was announced that the Kenya-South Sudan Highway would be completed next year.

Julius Korir, the principal secretary at the Ministry of Transport, Infrastructure, Housing and Urban Development, told local media that the project, which is being carried out by three Chinese contractors, was around 30% complete.

On top of reducing travel times along the route, the 248-km connection is expected to boost trade between the two countries.

While some 25% of South Sudan’s imports come from Kenya, the poor quality of existing connections prevents more Kenyan goods from being exported to its northern neighbour.

At present, many Kenyan traders are led to transport goods to South Sudan via Uganda, a journey that can take up to three days. Once completed, the highway should reduce this travel time to one day or less.

These developments come alongside significant efforts to improve the broader transport network.

While the amount allotted to roads was almost double that of the previous financial year, at KSh115.9bn ($1.1bn), significant funding was also provided for standard-gauge rail development, the Lamu Port-Southern Sudan-Ethiopia Transport (LAPSSET) corridor and the Mombasa Port Development Project.

In addition to public funds, the country has turned to the private sector to carry out large-scale projects.

In particular, the government has utilised the public-private partnership (PPP) model for infrastructure development, with the ongoing Ngong-Kiserian-Isinya and Kajiado-Imaroro road projects being carried out as PPPs.

According to a July report from the Ministry of Transport, Infrastructure, Housing and Urban Development, the country needs KSh2.4trn ($23.2bn) to finance transport, housing and other major infrastructure projects through to 2022.

The report stated that KSh1.6trn ($15.5bn) is expected to be publicly funded, with the remaining KSh800m ($7.7bn) to come from the private sector.

Another challenge is related to the quality of new infrastructure projects, amid concerns over faulty designs or poor construction.

Examples of problematic developments include the KSh50bn ($483.9m) Mombasa-Nairobi Oil Pipeline, completed in August last year but already experiencing leakage, and the Eastern Bypass in Nairobi, which was completed just five years ago but, due to inadequacies in its initial design, is currently being expanded at a cost of KSh40bn ($387.1m).

To help address some of these issues, the government has recently started to use performance-based contracts (PBCs), particularly for road projects.

PBCs, which include provisions relating to the quality and function of roads, have been cited by government officials as a major factor in improving the quality of recent projects.