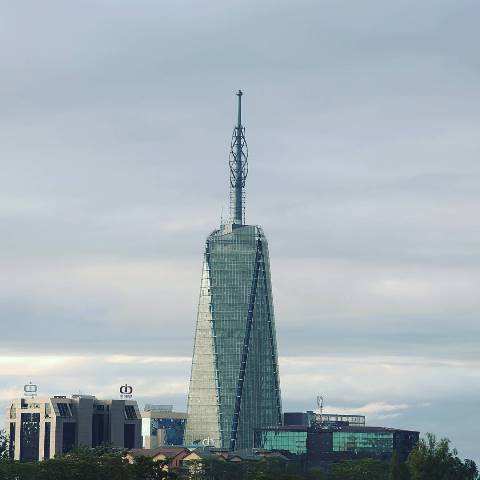 One of the tallest buildings in Africa, Britam Tower has been officially launched and is now accepting tenants, Britam Holdings Plc the firm behind the skyscraper has announced.

It follows successful completion of the project last year at a cost of Ksh7 billion.

With 32 usable floors, Britam Tower is the tallest building in east Africa and the third tallest in Africa.

The building’s special features include; total lettable space of 350,000 square feet with 1,000 parking bays, a 15-storey parking silo with an interlinking bridge at the topmost level of the parking to offer alternative means of evacuation during emergency situations.

Britam Tower also features eight high-speed lifts to travel from ground floor to the top floor in less than 30 seconds which Dr Wairegi says “are the fastest lifts in any building in Africa.”

“The comfort you have with this building is that if there was to be an earthquake in Nairobi, this would be the last building standing,” he said.

Upper Hill where the project is located has attracted skyscrapers targeting corporate institutions both in Kenya and internationally.The Pinnacle, which upon completion will be the tallest in Africa is located in the area.