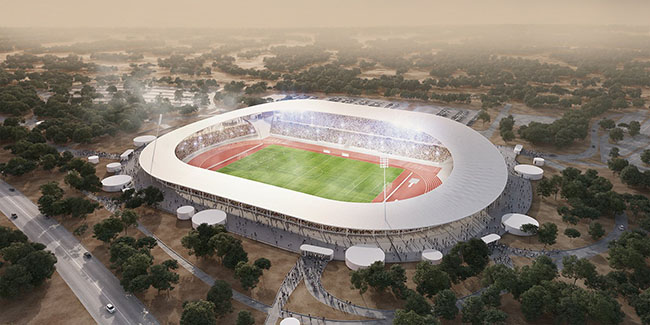 Worth €72 million, the contract calls for the construction of the main stadium in Yamoussoukro and the refurbishment of four training facilities located near the city (refurbishment of sports grounds, locker rooms and lighting).

Designed by architects SCAU, the new stadium in Yamoussoukro will seat 20,000 spectators for matches of the Africa Cup of Nations (CAN), which will be hosted by Côte d’Ivoire in 2021.

An artificial turf running track will surround the football pitch, complementing the jumping and throwing areas.

The works, scheduled to start in April 2018, will be completed in June 2020. With more than 1 million hours of work needed to execute the contract, Sogea-Satom is planning to hire and train over 300 people locally.

Côte d’Ivoire’s GDP growth is expected to reach 7% in 2018 and 2019, making the country one of Africa’s most dynamic economies. VINCI’s earlier contracts there include the modernisation of Abidjan’s fishing port (2015) and the Songon water treatment plant (2016).

In 2017, the Group carried out works to reinforce Abidjan’s water distribution network.

Other projects currently under way include the urban development of Boulevard de Marseille in Abidjan, construction of a water treatment plant at Saint Viateur and construction of a road between Bouaké and Ferkessédougou.