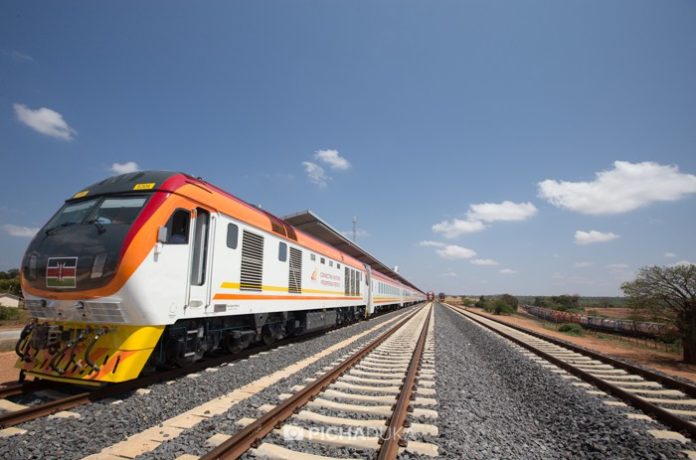 The Kenya Electricity Transmission Company Limited (KETRACO) says its has signed a contract worth $240M with China Electric Power Equipment and Technology Company Limited (CET) to electrify the country’s SGR rail line that is currently powered by diesel.

The project involves construction of 14 substations between Mombasa and Nairobi.

The main purpose of this venture is to ensure that when the SGR switches to clean energy power source, the supply will be reliable and sufficient for not only the train but other facilities along the Mombasa-Nairobi economic belt including train stations, planned industries, factories and businesses near the railway.

This will create more major power customers and consumers and bring other opportunities to the locals.

The design of the SGR railway, initially run by diesel-powered locomotives, allows for the addition of a single electric line that will be connected to KETRACO’s 482km 400kV Mombasa-Nairobi Transmission Line (MNTL) that was energized by President Uhuru Kenyatta on the 4th of August, 2017.

MNTL, the longest and highest voltage transmission infrastructure in East Africa, has a transfer capacity of 1,500MW which is 200MW shy of the current national demand of 1,700MW.

The line was constructed to address the challenges of low voltages, high transmission losses, unreliable supply including strengthening of network security and the national grid system.

Its energization therefore debunks as flawed the myth that Kenya does not have a dependable source of electricity, most importantly one that can power the electric train network.

A little history on electric trains would suffice. At the turn of the 20th century, diesel trains replaced steam engines as a cleaner and efficient means of transport for commuters and commodities. Afterwards, engineers worldwide developed electric-diesel “hybrid” trains.

With the advent of environmentally friendly wheeled vehicles in the 21st century, coupled with technological innovations in the field of energy production, Kenya will soon join the mosaic of countries with electric trains motorized by clean energy sources.

The transport sector, in many parts of the world, presents real environmental challenges, and as a people, we have a duty to safeguard a more ecofriendly future. As we make long term decisions that will affect the future of generations to come, it is prudent to consult accurate data.

In 2015, while addressing 150 Heads of States and Governments at the Conference of Parties (COP21) Global Climate Summit in Paris, President Uhuru Kenyatta highlighted Kenya’s “introduction and management of low carbon and efficient transportation systems.”

He further noted that “greenhouse gas emissions have reached the threshold with the net effect of causing irreversible global warming.”

It further notes that currently “the entire transport sector – the mobility of people and transportation of goods – accounts for approximately 23% of CO2 emissions from fossil fuels or 15% of global greenhouse gas emissions.

According to a joint report by International Union of Railways and Community of European Railway and Infrastructure Companies, travelling by rail is on average 3 to 10 times less CO2 intensive compared to road or air transport. Rail transportation emits about 0.2 pounds of CO2 per passenger mile. This number is much lower than those of air transportation, PSVs and personal cars.

Association of American Railroads report dubbed “Green from the Start” indicates that “estimates have shown that if just 10% of long-distance freight that is currently moving by truck were to be moved instead by diesel trains, the resulting carbon emission reduction would be the equivalent of taking 2 million cars off the road.” Mind boggling would be the results once the diesel trains are replaced by electric ones.

Kenya’s case would be more dramatic as with KETRACO’s geothermal powered transmission line that will electrify the SGR, a zero CO2 emission could be achieved.

This then calls for stronger partnerships amongst the key players for the ultimate success of this project that will reduce the carbon footprint of our Country and that of the world.

Additionally, our Country’s geographical position is quite unique and gives us great economic advantages that makes it perfect for strategic partnerships with the focus of improving regional and global market share. Our infrastructure, in specific the SGR, is a gateway to the vibrant East and Central Africa region.

It is of supreme significance to our economy and the economies of landlocked countries in East Africa including Uganda, Rwanda, South Sudan and Burundi. Starting from the port of Mombasa, the electric line will in the near future cope with increased trade between Kenya and our East African counterparts including the landlocked neighbors as it will be faster and more efficient.

In the words of Hon. Chirau Ali Mwakwere, the former Transport Minister, “by 2030 Mombasa is expected to handle more than 30 million tonnes of cargo annually.” This necessitates the electrification of the rail line that is a requisite for faster movement of bigger containers and passengers in the quest to boost EA’s competitiveness as an investment hub.

As I conclude, the electrification of SGR has had its fair share of criticism with its opponents questioning its economic viability to the Country.

However, I do believe that in the long run the benefits will far outstrip the costs of construction. From a further reduction in transport/travel costs thanks to cheaper more reliable energy source to the creation of new jobs during the 28 month electrification phase.

With increased speeds, the number of trips will double if not triple and result in opening the access to rail transport for millions of Kenyans. Urbanization along the SGR route cannot be ignored.

A faster more efficient transport system will cut costs of food transport and that will lead to reduced prices of commodities for the common mwananchi.

The regional growth expected in future due to the electrified line will significantly cut journey intervals between Kenya, Uganda and Rwanda for both goods and passengers: this will fortify ties between the countries creating a network of links between ports and cities in East Africa.