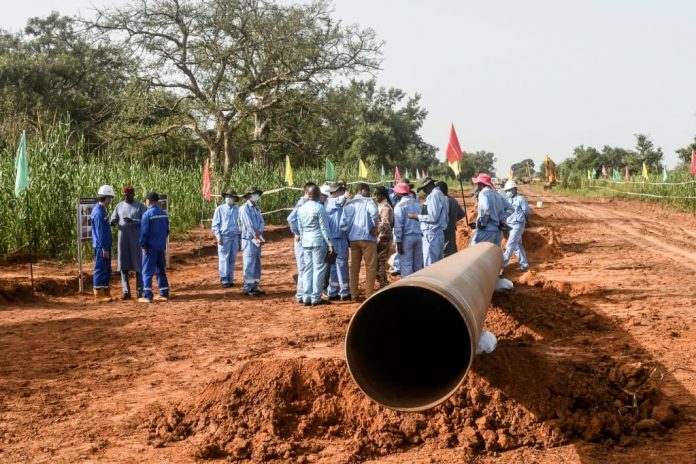 Africa’s longest oil pipeline is 30% complete president Mohamed Bazoum has announced. “Over 600km have already been laid across several sections of the Niger-Benin Oil Export Pipeline,” the Presidency said.

The $4bn pipeline will be 2,000km long and link Niger’s oilfields in the Agadem Basin to an export terminal at Sèmè-Kpodji in Benin. It is being built by the West African Oil Pipeline Company (WAPCO), a subsidiary of the China National Petroleum Corporation (CNPC).

Upon completion, it will export up to 90,000 barrels of oil per day (bopd) from Niger. Its commissioning is expected at the end of 2023.

CNPC currently produces only about 15,000 bopd from Niger to supply its 20,000 bpd SORAZ Refinery. Once the pipeline is operational, the Chinese operator intends to ramp up its production to 110,000 bopd, most of which would be exported.

Spare capacity will still be available for third-party operators like Savannah Energy, operator of the R1234 PSC area onshore Niger.

The Niger-Benin crude pipeline project, which represents phase two of the Agadem oilfield development, involves the construction of a new pipeline and associated facilities. It wil feature a single point mooring system, which is expected to export 4.5Mtpa of crude oil.

The total length of the new pipeline will be 1,950km, out of which roughly 1,275km will run through Niger’s territory, while the remaining 675km portion will be in the Republic of Benin.

The project will also comprise nine intermediate stations before terminating at the Port of Seme. It will be capable of delivering up to 90,000bpd of crude oil to the Port Seme export terminal located on the Atlantic Coast in Benin.

Construction of the project is expected to generate additional traffic to the Port of Cotonou in Benin. The port is expected to process up to 300,000 tonnes (t) of goods, once the pipeline becomes operational.

Launched in 2019, the project was supposed to be completed in 2022, but the Covid-19 pandemic slowed it down, said Nafiou Issaka, deputy general manager of the West African Oil Pipeline Company (WAPCO).

According to news agency AFP, More than 700 soldiers have been deployed to ensure security for the project, though a large part of the territory it crosses has so far been spared from jihadist violence, according to a security source who asked not to be named.

Oil production from the Agadem block, which was the first phase of the development, began in November 2011. The oil is exported to CNPC’s Zinder oil refining facility in southern Niger. The facility currently produces petrol, diesel, and LPG products for domestic consumption.

The Agadem field is connected to a nearby refinery at Zinder via an approximately 13-inch diameter and 462.5km-long existing pipeline. It also comprises seven stations, which include three heating stations, three clean-up stations, and a terminating station.

“Six billion dollars will be invested in the construction of this pipeline. It is the biggest investment of Niger (a former French colony) since its independence (in 1960),” observes Kabirou Zakari, the director of Hydrocarbons at the Nigerien Ministry of Oil.