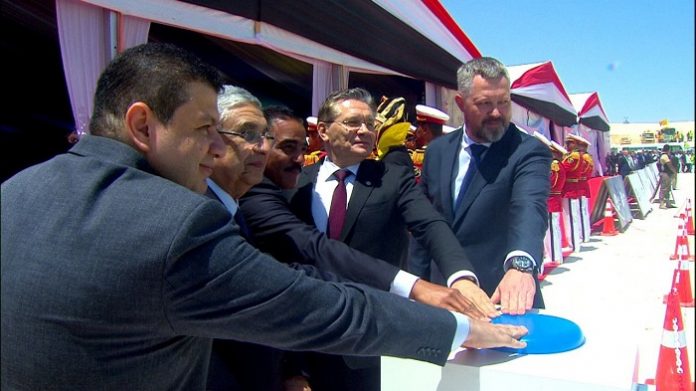 Construction  has begun in earnest on El-Dabaa Nuclear Power Plant in Egypt the first such project in the country.

Alexey Likhachev, ROSATOM Director General, and Dr. Mohamed Shaker, Egyptian Minister of Electricity and Renewable Energy were present early this week during the ceremony to mark the start of construction work.

Earlier, on 29 June 2022, ahead of schedule, ENRRA issued the construction permit for the El-Dabaa Nuclear Power Plant Unit 1, allowing construction work to commence.

The El-Dabaa Nuclear Power Plant is the first nuclear power plant in Egypt. It will be constructed in the city of El-Dabaa, Matrouh Governorate, on the Mediterranean coast, roughly 300 km north-west of Cairo. The El-Dabaa Nuclear Power Plant will consist of 4 units with a generating capacity equivalent to 1200 MW per unit using generation III+ VVER-1200 reactors (pressurized water reactors).
This is the most advanced technology to date and it has already been successfully implemented and operated in Russia and abroad. There are four operating units equipped with such reactors in Russia: two reactors at each of the sites of the Novovoronezh and Leningrad nuclear power plants. Outside of Russia, a VVER-1200 reactor based power unit was connected to the grid at the Belarusian nuclear power plant in November 2020.
The El-Dabaa Nuclear Power Plant is being constructed according to the contracts which became effective on 11 December 2017. Pursuant to the relevant contractual obligations, the Russian Party will build the El-Dabaa Nuclear Power Plant, deliver Russian nuclear fuel for its entire life cycle, as well as assist the Egyptian Party in personnel training and support them in the operation and servicing of the Nuclear Power Plant for the first 10 years of its operation. Within the framework of another agreement, the Russian Party will build a special storage facility and deliver casks for storing spent nuclear fuel.

“The Construction launch at the El-Dabaa NPP Unit 1 means that Egypt has joined the nuclear club. Rosatom will build cutting-edge power units of VVER-1200 design in the Arab Republic of Egypt. We have gained experience constructing and operating NPPs with such reactors both in Russia and abroad. Construction of the nuclear power plant will allow Egypt to reach a new level of technology, industry and education development. The plant will be the largest project of the Russian-Egyptian cooperation since the Aswan High Dam. Having its own nuclear energy industry has been a dream for the Egyptian people for more than half-a-century, and it is a great honor for Rosatom to make this dream come true,” Alexey Likhachev noted.

Dr. Amged El-Wakeel, Board Chairman of the NPPA welcomed the attendees and stated: “I would like to welcome all of you in today’s ceremony arranged to announce the pouring of the first concrete for Unit 1 of the El-Dabaa Nuclear Power Plant Project which we are celebrating in the presence of H.E. Dr. Mohamed Shaker, Minister of Electricity and Renewable Energy and Dr. Alexey Likhachev, Director General of Rosatom.
This day would not have occurred without the wise decision of H.E. Abdel Fattah El-Sisi, President of the Arab Republic of Egypt, to initiate the Egyptian Nuclear Project, following which all state entities sparred no efforts in order to achieve this common goal through a deep understanding of the nature of Egypt’s Nuclear Programme, as part of the comprehensive renaissance contributing to the new republic.”
Dr. Mohamed Shaker also stated: “The ceremony commemorating the pouring of the first concrete for Unit 1 was met with great delight on our part. The commencement of full-scale construction of Unit 1 is a historic event for Egypt. The political leadership and the Egyptian-Russian cooperation contributed to implementation of this ambitious Project despite the challenges presented by the Covid-19 pandemic which did not have a negative impact on the Project.”
Also Read