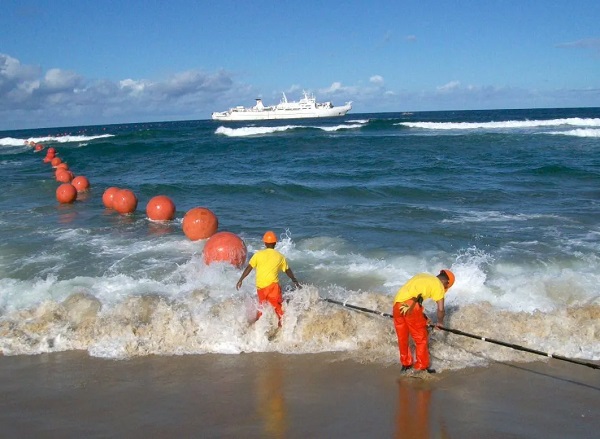 djibouti has finally welcomed the landing of the World’s longest subsea cable 2Africa.

An important ceremony was organized for this purpose at the beach Siesta under the patronage of the Minister of Communication in charge of Posts and Telecommunications, Mr. Radwan Abdillahi Bahdon and in the presence of Djibouti Telecom representatives.

This ceremony also saw the attendance of several representatives from the Smart Africa Alliance staying in our country as part of a seminar on the Cloud co-organized with the Ministry of Digital Economy and Innovation.

Led by Facebook, the 2Africa cable has arrived in Djibouti after many months of this huge submarine network being laid. It is important to note that this cable (2Africa) links three continents: Africa, Asia and Europe. It extends over 45,000 kilometers, making it the longest fiber optic submarine cable ever deployed.

This cable is the 9th to land in our country meaning Djibouti Telecom, has significantly expanded its connectivity capabilities. Djibouti Telecom believe that the undersea fiber optic network is the most reliable way for people to be connected, given the increasing dependence on the Internet. To meet this growing demand, the company entered into an agreement with Facebook to land the 2Africa cable in Djibouti.

The realization of this large-scale project has been entrusted to a French company called ASN (Alcatel Submarine Networks).

Through the new capacities that will be provided by the 2Africa submarine cable, combined with those of the eight other cables already in place, Djibouti Telecom not only strengthens the supply of connectivity, but will also reinforce our country’s position as a regional hub, attracting more foreign investors.

Djibouti Telecom plans to host this new cable in our new Cable Landing Station under construction, which will also host others in the future. This building will have 3 levels, with the latest technology, offering unparalleled operational efficiency and the security to accommodate multiple cables.