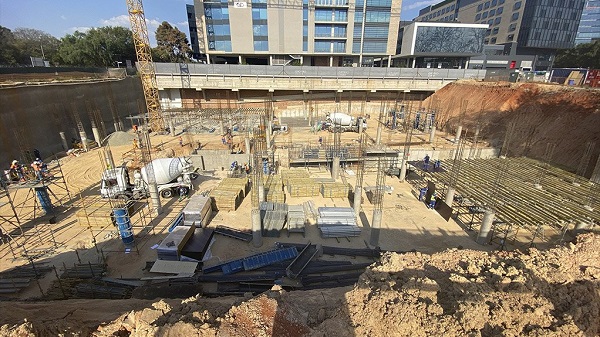 Applying innovative construction methods and its well-established quality and scheduling systems, Concor has met another tight deadline with the handover this February of the Ikusasa building in Rosebank, Johannesburg.

The building – which features four storeys above ground and three basement levels – is part of the popular Oxford Parks mixed-use precinct in Johannesburg, and will be occupied by Anglo American Global Shared Services (AGSS).

According the Concor site agent Warren Mills, the company’s core team was required to manage around 70 specialised subcontractors, ensuring the most efficient deployment of resources to meet the project’s demanding timeframes.

“Among the innovations we employed to cut the construction time was the use of larger foundation piles,” says Mills. “This meant that there was no need for concrete bases or excavating around each pile; instead, the design allowed the columns to be cast over the piles.”

Some 115 piles were cast, with columns spaced on an 8.4 metre by 8.4 metre grid to hold the suspended concrete slabs. By expediting this part of the contract, Concor could give early access to the wet trade contractors like bricklayers and tilers, as well as to the installers of the unitised façade panels.

“This allowed us to make rapid progress toward the external works and the internal fit-out,” he says.

Another innovation was to back-prop on just two levels rather than the traditional three levels. This also allowed earlier access to the lower floor plate, to initiate brickwork and ‘first fix’ services such as floors, ceilings, electrical supply cables and water pipes.

“The result was to facilitate beneficial occupation for the tenant, giving them early access in a phased approach to prepare the working areas with furniture and other fixtures in time for employees to start work,” says Mills.

The building’s four levels make up over 7 500 m2 GLA, while the three basement levels cover more than 10 300 m2. The structure consumed about 8 700 m3 of concrete and over 800 tonnes of reinforced bar.

In line with sustainable building practice, a priority on the site was reducing, re-using and recycling construction waste. This included separating waste at source, ensuring that rubble, wood, steel and plastic was sorted into dedicated skips. By preventing contamination of different waste streams, waste could be more efficiently and cost effectively recycled.