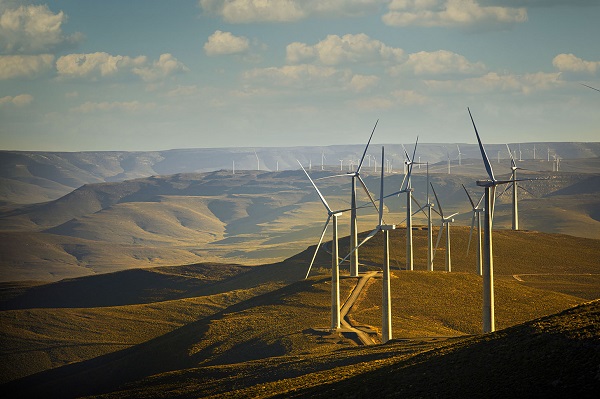 The project that is situated on the border of the Northern and Western Cape Province has an installed capacity of 147MW and a contracted capacity of 140MW. As at commercial operations, the Roggeveld wind farm is now feeding much-needed electricity into the Eskom grid.

The project milestone, that was officially achieved on 26 February, sees the African Independent Power Producer (IPP) effectively near double its project’s asset base. Its renewable energy projects in operation, under construction, or awarded preferred bidder status across the Continent now total 750MW.

Roggeveld Wind farm was awarded preferred bidder status under Round 4 of South Africa’s Renewable Energy Independent Power Producers’ Procurement programme (REIPPPP). The project reached the peak of its construction as the covid pandemic took hold globally, and the build was halted for a short period in adherence to covid restrictions.

Says Matteo Brambilla, CEO of Red Rocket: “While Covid had impacts on our construction
by reaching COD, we believe that we have evidenced our determination to deliver clean energy and meaningful economic participation for the communities we serve.”

Hendricks says: “Together with Red Rocket, H1 is actively working towards contributing to meeting South Africa’s commitment to a low-carbon energy system.” Also noteworthy is the participation of the Public Investment Corporation (PIC) which funded shareholding on
behalf of the Government Employee Pension Fund (GEPF).

Through its involvement, the PIC undertook its first direct equity investment in a wind farm, which adds to its large portfolio of mainly Solar PV and CSP technology
plants. Tshepo Rachidi, Associate Energy Fund Principal for Impact Investing at the PIC explained:

“This investment aligns with a greater focus of meaningful investments that yield reduced environmental impacts while delivering real economic and social returns. Alongside my colleagues, Winni Setshedi and Refiloe Morailane, this 7-year journey for the actualisation of Roggeveld also bears testament of all stakeholder’s existing, unwavering commitment to alleviating the current national energy struggles.”

Commenting on the announcement, AIIM CIO for SADC, Sean Friend, said, “AIIM is delighted that Roggeveld has begun operations, further decarbonising the South African grid. This is the IDEAS Fund’s ninth and final project from Round 4 of REIPPP that is now operational and generating much needed clean electricity for the country.

It also marks nine projects which have contributed to local economies, created employment opportunities and improved economic equality across the country.” The other shareholders are H1 Holdings (23,25%), the Government Employees Pension Fund (23,25%) funded via the Public Investment Corporation (PIC), and the local communities through the Roggeveld Wind Power Trust (2,5%).

Constructed at an estimated cost of R4,4billion, the 47 Nordex wind turbines at the Roggeveld Wind Farm will generate around 613 GWh per year.

The energy generated will satisfy the energy needs of roughly 49 200 households every year while avoiding the emission of about 502 900 tons of CO2 emissions.