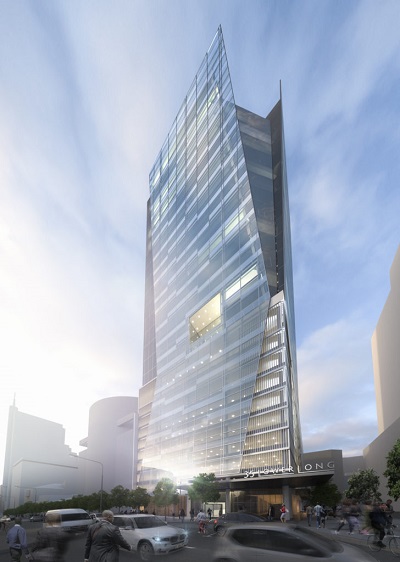 In 2018, excavation begun on what would be one of the most elegant and dynamic office tower in South Africa.

Now complete and with a Green Star rating, the 35 Lower Long tower as it is being called could be an epitome of sustainable practices.

The building towers on a peninsula site bound by Lower Long Street and Jetty Streets in Cape Town. Designed by dhk architects for land owner Ellerine Brothers and developers Abland, the new tower replaces a lower building designed in the late eighties.

Great care has been taken to invigorate this part of the city, both on street level and in the greater cityscape. It is envisaged as one of the first of a cluster of taller buildings appropriate for the presently underdeveloped area flanked by Lower Long and Loop Street.

The new 35 Lower Long is characterised by a singular sculpted massing with dynamic glazed facades which extend seamlessly over both the offices and parking levels. The glazed façade terminates above ground level to emphasize the newly activated street edge.

The entire length of the street frontage along Lower Long & Jetty Street is animated by new ground level retail, with multiple entry points to the office building and a prominent office entrance.

The two main corners of the building are increasingly chamfered towards the roof, breaking the solidity of the building. The wing-like glazing on the main street facing facades soars upwards past the chamfered corners, further articulating and defragmenting the solid orthogonal building mass.

The sculptural building will create a dynamic form when viewed from across the city, both at street level and from nearby buildings.

Built on a very constrained brownfields site, the new office building is specifically designed to equip tenants with knowledge and skills around sustainability, and to give them a workplace that enhances their productivity – with interiors boasting various spaces to work privately and collaboratively, and to interact socially.

Green building features were incorporated from the outset to enable employee wellbeing and to reduce the overall consumption of resources.

Lighting levels were designed to be 80% less than the prescribed standard, while still being above the Occupational Health and Safety (OH&S) requirements. Only high frequency luminaire ballasts will be installed, eliminating the chance of discomfort to building users caused by the flicker of low frequency lamps.

All individual or enclosed spaces are less than 100sqm in size and are individually switched in order to provide greater flexibility, making it easy to light only occupied areas. Lighting sensors have also been specified to assist with this target.

And, to reduce energy consumption, the lighting power density for 95% of the useable area is less than 1.5W/m2 per 100m2.