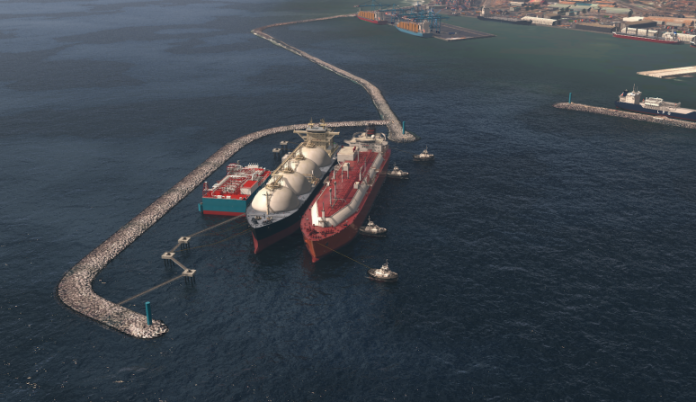 ACCRA (Bloomberg):Ghana is set to open sub-Saharan Africa’s first liquefied natural gas-to-power project as it moves to position itself as a hub for the cleaner and cheaper fuel in the region.

LNG-to-power projects have been booming from Asia to Latin America in recent years as they allow nations to switch from dirtier fossil fuels to keep the lights on. And for sellers, integrated LNG-to-power provides a guaranteed outlet for the fuel.

Tema LNG Terminal Co. received the floating regasification unit from Jiangnan, China on Wednesday, paving the way for the supply of 1.7 million tons of natural gas per year for power generation sometime this quarter, Edmund Agyeman-Duah, project manager at the company, said.

“Ghana can now start to service the rest of the region with fuel that is continuously growing in popularity because of the cost and the significant environmental benefits it provides,” Agyeman-Duah said.

On a lifecycle basis, LNG emits around half the greenhouse gas emissions that coal does when burnt to generate electricity, and compared to a typical new coal plant, natural gas emits 50 to 60% less carbon dioxide when combusted in a new efficient natural gas power plant, according to the International Group of Liquefied Natural Gas Importers.

For a country with 30 million people, Ghana’s electricity consumption has grown alongside its economy, but it remains lower than the average per capita consumption of Sub-Saharan Africa and far below that of developed countries. For comparison, a U.S. resident consumes more than 30 times as much electricity as a Ghanaian resident, according to World Bank data.

“The completion of the Tema LNG facility will be significant for Ghana and the wider West African sub-region because it will mean less dependency on the West African Gas Pipeline – which hasn’t always proved reliable,” Kissy Agyeman-Togobo, a partner and analyst at Songhai Advisory Group Ltd., said by phone from Accra, Ghana’s capital.

Tema LNG Terminal is getting its gas under a long-term contract with Royal Dutch Shell Plc, said Agyeman-Duah, who isn’t related to the analyst. State-owned Ghana National Petroleum Corp. is currently the mandatory off-taker who will receive regasified LNG to fuel plants in the Tema power and industrial enclave.

“There’s quite a bit of suppressed demand in the system,” he said. “There are a lot of industrial customers who work off-grid because of the interruptions they suffer in power supply.”

The company has given Spain’s Reganosa Servicios SL the contract for the operation and maintenance of the unit and associated 6 kilometer (3.7 miles) gas pipeline, it said in a statement.

The project was financed with a combination of equity and debt from a consortium of international banks, according to Agyeman-Duah, and its processed LNG is expected to be 30%-35% cheaper than heavy fuel oil, he said.