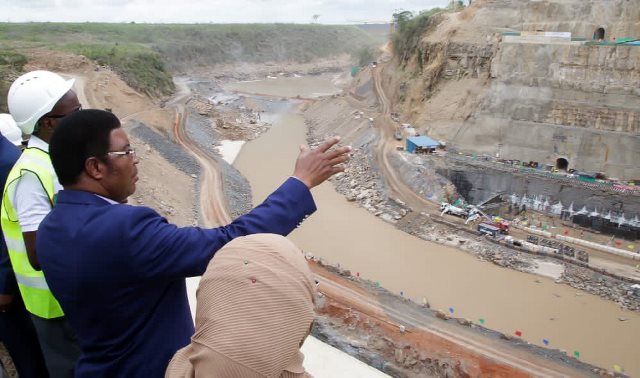 The dam is part of Julius Nyerere Hydropower Station planned to have a capacity of 2,115 megawatts and produce 6,307 GWh per annum. The capacity of the dam’s reservoir is 34 billion cubic meters.

Also known as Rufiji Hydroelectric Power Station, the project has also involved diversion of Rufiji water to allow construction of the electric dam.

in 2017, The government of Tanzania handed over the construction site to the consortium comprising Arab Contractors and El Sewedy, both of Egypt, who had been selected to build the power station.

In April 2019, the Tanzanian government made an upfront payment of US$309.645 million, representing approximately 15 percent total cost of construction. As of June 2020, the project is 40 percent complete.

At 2,115 megawatts, the dam’s contribution is more than the current peak demand of Tanzania. The country’s highest recorded power demand was 1051.27 megawatts in February 2017.

Installed capacity has been reported to be between 1366.60 megawatts and 1,602 megawatts. The Stiegler’s Gorge Hydropower Project will therefore significantly increase the installed capacity on-grid in Tanzania, supporting power for industrialisation and electrification.

But the project has also received criticism from environmental experts because the location of the gorge is in the middle of the Selous Game Reserve World Heritage Site. Conservationists are opposed to this project saying it threatens the endangered animal species in the area especially the black rhinoceros and elephants.