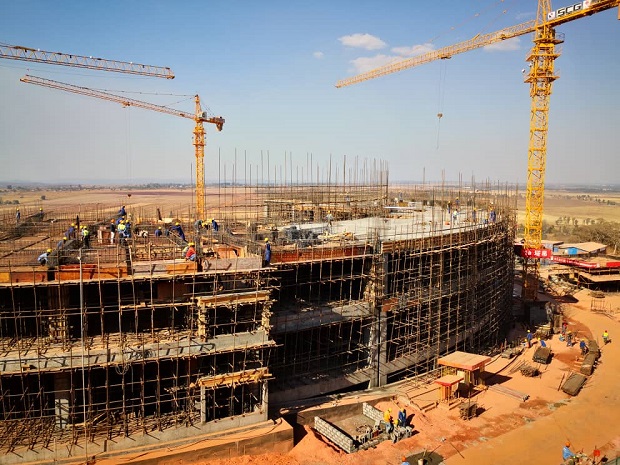 Structural works on a new parliament building being constructed in Zimbabwe are complete, the Ministry of Local Government and Public Works has said.

Acting permanent secretary Mr Christopher Shumba said that the project is ahead of schedule.

Zimbabwe is building a six-storey Parliament Building in Mount Hampden to replace the current one  in the city centre that is too small to accommodate lawmakers.The new parliament is being constructed by the Shanghai Construction group.

The parliament building in Zimbabwe features common areas, offices, special services, general public and press areas, 800 parking bays, 50 of which are reserved for VVIPs, and associated services. China is supporting construction of the project with US$100 million grant.

The progress of the project had been hindered by the outbreak of the coronavirus in Zimbabwe which necessitated restriction of movement.Thus, workers on site were scaled down.

Only 80 Chinese professionals are on site, “plastering, doing the wiring for electricity, and some air-conditioning works from the top coming down”,said Engineer Henry Hungwe, who is the acting chief director for Public Works at the ministry.

Local workforce is expected to resume work at the end of this month in accordance to health safety guidelines.

China’s move to construct government institutions in Africa has been met with mixed reactions with critics expressing their concerns. In May this year a US based conservative think tank Heritage Foundation, said that Chinese funded buildings in Africa could be a likely vector for spying.

In a report, the think thank observed that the Chinese companies constructing government institutions in Africa were obliged to gather intelligence on behalf of the China.

“The Chinese state companies have built at least 186 government buildings in Africa and at least 14 sensitive intra governmental telecommunication networks,” said Joshua Meservey, senior policy analyst for Africa at the Heritage Foundation and the author of the report.

One of the buildings that elicited reactions is the African Union headquarters in Addis Ababa. French newspaper Le Monde reported in 2018 that servers installed by the Chinese telecommunications giant Huawei in the African Union (AU) headquarters were daily uploading their content to servers based in Shanghai, China.

But Chinese officials have rubbished the claims as baseless.China’s ambassador to the AU, Kuang Weilin, called the article “ridiculous and preposterous” and said its publication was intended to put pressure on relations between Beijing and the continent.

The African Union has also rejected the claims saying it does not have an secret dossier to be spied on.

“What I can assure you of is that the relations between China and Africa, as I described, are unwavering. No maneuvers of this type can distract us from our objectives,” said Mahamat Faki head of African Union Commission.

But for Meservey, the ability of China to collect sensitive information on Africa would likely put it ahead of the competition curve when it comes to tendering for huge projects.

In 2018, China inked a deal to construct  ECOWAS headquarters in Nigeria at a cost of US$31.6. The new building is expected to consolidate ECOWAS operations in one building from the three it now uses. China has also agreed to maintain the new building for three years following its completion.

For Zimbabwe, the partnership with China should be emulated by all in Africa.