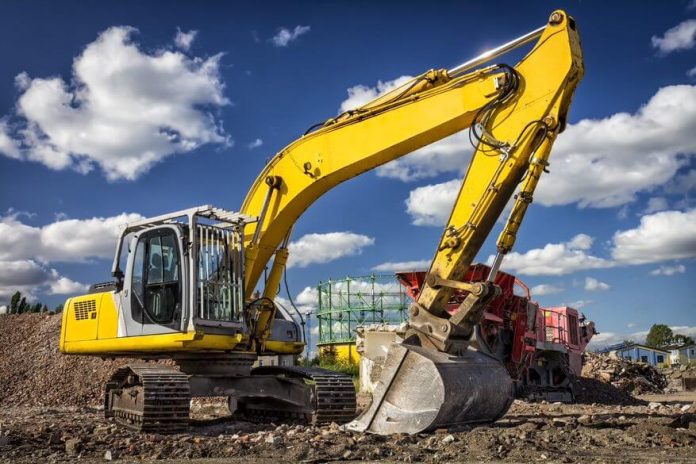 We look at some of the best earth-moving heavy construction equipment available in the market:

A backhoe loader, also called a loader backhoe, digger in layman’s terms, or colloquially shortened to backhoe within the industry, is a type of earth-moving heavy construction equipment that consists of a tractor-like unit fitted with a loader-style shovel/bucket on the front and a backhoe on the back.

Due to its (relatively) small size and versatility, backhoe loaders are very common in urban engineering and small construction projects (such as building a small house, fixing urban roads, etc.) as well as developing countries.

This type of machine is similar to and derived from what is now known as a TLB (Tractor-Loader-Backhoe), which is to say, an agricultural tractor fitted with a front loader and rear backhoe attachment.

The true development of the backhoe actually began in 1947 by the inventors that started the Wain-Roy Corporation of Hubbardston, Massachusetts.

Excavators are earth-moving heavy construction equipment consisting of a boom, dipper (or stick), bucket and cab on a rotating platform known as the “house”.The house sits atop an undercarriage with tracks or wheels.

They are a natural progression from the steam shovels and often mistakenly called power shovels.

A bulldozer is a large and heavy tractor equipped with a substantial metal plate (known as a blade) used to push large quantities of soil, sand, rubble, or other such material during construction or conversion work and typically equipped at the rear with a claw-like device (known as a ripper) to loosen densely compacted materials. It is usually a crawler (continuous tracked) tractor.

Bulldozers can be found on a wide range of sites, mines and quarries, military bases, heavy industry factories, engineering projects and farms.

The term “bulldozer” correctly refers only to a tractor (usually tracked) fitted with a dozer blade.

A skid loader, skid-steer loader or skidsteer is a small, rigid-frame, engine-powered machine with lift arms that can attach to a wide variety of labor-saving tools or attachments.

Skid-steer loaders are typically four-wheel vehicles with the wheels mechanically locked in synchronization on each side, and where the left-side drive wheels can be driven independently of the right-side drive wheels.

The wheels typically have no separate steering mechanism and hold a fixed straight alignment on the body of the machine. Turning is accomplished by differential steering, in which the left and right wheel pairs are operated at different speeds, and the machine turns by skidding or dragging its fixed-orientation wheels across the ground.

The Crawler Loader is a Kind of big Loader with tracks allowing mobility in terrains having instable shapes and consistence. Among the most popular Crawler Loader Makes over the world market we find Case, Caterpillar (CAT), Furukawa, Komatsu and Liebherr.

A trencher is a piece of construction equipment used to dig trenches, especially for laying pipes or electrical cables, for installing drainage, or in preparation for trench warfare. Trenchers may range in size from walk-behind models, to attachments for a skid loader or tractor, to very heavy tracked heavy equipment.

Trenchers come in different sizes and may use different digging implements, depending on the required width and depth of the trench and the hardness of the surface to be cut.

A wheel trencher or rockwheel is composed of a toothed metal wheel. It is cheaper to operate and maintain than chain-type trenchers. It can work in hard or soft soils, either homogeneous (compact rocks, silts, sands) or heterogeneous (split or broken rock, alluvia, moraines). This is particularly true because a cutting wheel works by clearing the soil as a bucket-wheel does, rather than like a rasp (chain trencher).

A grader, also commonly referred to as a road grader or a motor grader, is an earth-moving heavy construction equipment with a long blade used to create a flat surface during the grading process. Although the earliest models were towed behind horses or other powered equipment, most modern graders contain an engine, so are known, technically erroneously, as “motor graders”.

Typical models have three axles, with the engine and cab situated above the rear axles at one end of the vehicle and a third axle at the front end of the vehicle, with the blade in between. Most motor graders drive the rear axles in tandem, but some also add front wheel drive to improve grading capability. Many graders also have optional attachments for the rear of the machine which can be ripper, scarifier, blade, or compactor.

In civil engineering, a wheel tractor-scraper is a piece of heavy equipment used for earthmoving. The rear part of the scraper has a vertically moveable hopper with a sharp horizontal front edge which can be raised or lowered. The front edge cuts into the soil, like a carpenter’s plane cutting wood, and fills the hopper. When the hopper is full it is raised, closed, and the scraper can transport its load to the fill area where it is dumped. With a type called an ‘elevating scraper’ a conveyor belt moves material from the cutting edge into the hopper.

A dump truck, known also as a dumper truck or tipper truck, is used for taking dumps (such as sand, gravel, or demolition waste) for construction as well as coal. A typical dump truck is equipped with an open-box bed, which is hinged at the rear and equipped with hydraulic rams to lift the front, allowing the material in the bed to be deposited (“dumped”) on the ground behind the truck at the site of delivery.

In the UK, Australia and India the term applies to off-road construction plant only, and the road vehicle is known as a tipper lorry (UK, India), tip-truck, tip-trailer, tipper truck, or tipper (Australia and New Zealand).

How a concrete batching plant works 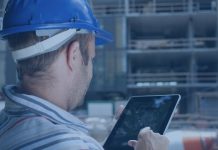 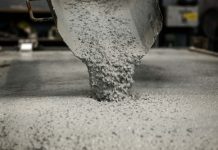