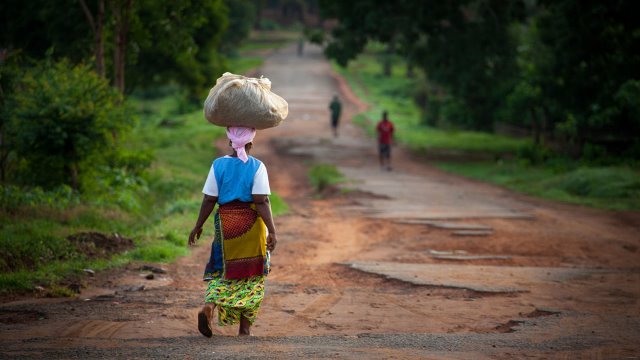 One of the fastest growing economies in Africa, Ethiopia, has an ambitious plan to cut a green, sustainable path to becoming a middle-income country by 2025.

Along the way, the country faces growing urban migration and rising demand for food – challenges that are linked by, and depend on, roads for access, supply and mobility.

But new roads in Ethiopia and across sub-Saharan Africa often change the landscape, bringing dust, flooding and erosion. The impact is felt most by rural communities. Roads can negatively affect water flows to wetlands, block fish movements and cause landslides, as well as impact the livelihoods of millions of people.

There is a solution: an approach to road building developed by Dutch social enterprise MetaMeta shows that it’s possible to reduce the impact of new roads and support food production by harvesting excess water.

Under a project rolled out in Ethiopia as well as nine other countries including Bangladesh, roads are being built using innovative designs and drainage structures to collect water caused by flooding. This has solved an infrastructural issue while conserving water that can be used for crops and to feed livestock.

Practitioners at MetaMeta found that more than a third of households in Tigray, northern Ethiopia, reported flooding as a result of new roads with negative effects on crop production for around one in ten households.

The study found that poor road construction can lead to soil erosion on farms and plots of land hugging the roadside. In addition, construction can increase the cost of road maintenance and repairs. This in turn limits transport options, including restricting access to markets, schools and hospitals. The net cost is damaged livelihoods.

One solution, developed by MetaMeta, helps both mitigate the impact of new roads and support food production by harvesting excess water with “smart roads”. A project called Roads for Water is testing the concept. Funded by the Global Resilience Partnership, an independent partnership of public and private organisations focusing on the most vulnerable people and places, this project uses innovative road concepts, designs and drainage structures to collect water caused by flooding.

For example, roads can route water to storage ponds or underground aquifers. Road drifts can help to retain water in dry riverbeds, and ensure systematic spreading of floodwaters.

By harvesting rainwater, communities living near road networks can increase their resilience to shocks such as floods and droughts.

In Ethiopia the project showed that USD$1,800 per km investment is sufficient to implement such measures, and can directly benefit over two million people.

This compares favourably with annual maintenance expenditures per kilometre of USD$1,100 per year on rural roads in sub Saharan Africa and a periodic maintenance of USD$11,200 often incurred from water damage.

These smart roads are increasing resilience to shocks, such as floods because water is being harvested and maintenance costs are reduced. They are also driving down the cost of road construction through, for example, the reuse of borrow pits for permanent water storage rather than requiring them to be backfilled. This is a considerable cost saving measure and additionally creates a local water resource.

In Bangladesh, for example, smart roads are helping build resilience to floods that submerged a third of the country last year. If countries like Ethiopia and Bangladesh are to become more resilient they will need innovative solutions to an increasingly uncertain climate.

The importance of building resilient roads will only intensify as populations grow and countries develop.

Globally, an estimated 900 million rural people still don’t have access to road and transport infrastructure. The investment gap on global roads is expected to approach USD$1.6 trillion per year for the next 40 years as increasing amounts of roads are built, especially in the developing world.

But solutions for better roads won’t work unless they are driven by local ideas and are compatible with local needs and contexts. Collaboration and buy-in between local partners – from engineers to technicians, farmers, labourers and governments departments – is critical. Solutions as simple as bringing the ministry responsible for roads together with the ministry responsible for water and talking them through the challenges and opportunities can produce remarkable results.

_Frank van Steenbergen, the head of MetaMeta, also contributed to the article. _