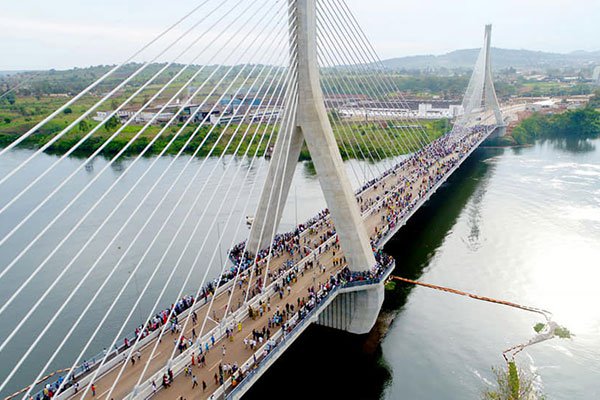 Uganda hope that the newly inaugurated smart bridge will help ease traffic flow and boost road safety in country that has been grappling with high frequency of road accidents.

A top Ugandan transport official was quoted by The East African as saying that the Nile Bridge will significantly boost trade in the region as well as ease traffic on the old Nalubaale Bridge.

The iconic bridge is fitted with eight cameras to take images of all vehicles passing through it. Once an overloaded vehicle is detected, sensors in the  bridge trigger the cameras to take pictures of the number plate  of the vehicle. The image is then sent to the ministry of transport and public works for further processing.

The Nile Bridge is a dual carriageway and measures 525 metres long and 22.9 metres wide. It was built at a cost of US$125m with financial support from Japan International Co-operation Agency (JICA).

Described as the latest technology in Japanese bridge engineering, the Nile bridge is fitted with laser lighting to illuminate the structure at night and in bad weather during the day.

“The technology that has been used here will inform future projects not only in Uganda but in the rest of Africa,” said JICA president in Uganda Shinichi Kitaoka.

The bridge is located in Jinja, a busy import-export corridor for Uganda through Kenya and, as such, provides the economic lifeline for the landlocked country.

It is the second of its kind in East Africa after Tanzania’s 680 metre-long Kigamboni Bridge, which was commissioned a fortnight ago.

The digital bridge has been in the cards for years, but began to take shape in 2010. Groundbreaking started in 2014 and was expected to be completed within 48 months but weather challenges pushed the date for a further five months.