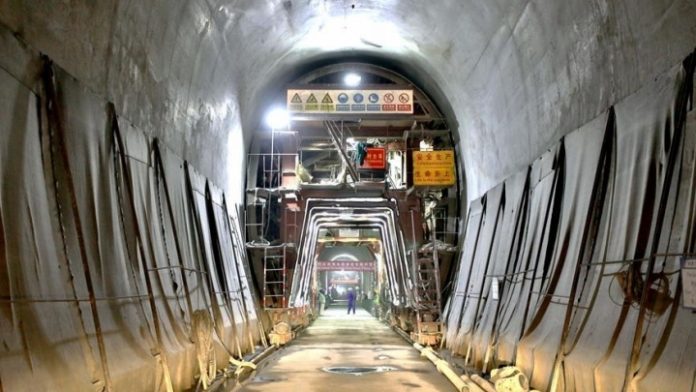 The tunnel is part of phase 2A of the Kenya’s SGR running from the capital city Nairobi to Naivasha town, 120 kilometres away.

The company’s officials said that some of the challenges that they faced during excavation include: water leakages, uneven pressure, shallow depth excavation, surrounding rocks, structural fault-line, and oil pipeline protection.

The 4.5 km Ngong tunnel is the longest in East Africa and one of the most identifiable aspect of the project, says An Aijun, a CCCC official on the SGR project.

The tunnel has been designed as a single track railway tunnel with a height of 9m and width of 7m.

Mr Aijun says that the plan is to finish the tunnel in 2019 t. “For the first time in Kenya the engineers are using the new Australian tunneling method (NATM) of drilling and blasting.”

The method used is economical, efficient and has strong adaptability for different geological and ground water conditions.

It is preferred since it can control surface collapse and enhances working environment during construction.

The general manager said they will protect the environment, implement local contents and participate in the social welfare programmers hence bring in benefits to the local communities.

The railway will be a time- honored railway that will stand the test of times and operations achieving success between the two nations.

Ateve zhao, the CCCC Kenya SGR project spokesperson revealed that 146 holes have been constructed within the tunnel for the workers to take cover as the train approaches.

The first phase of the project connecting Mombasa and Nairobi has been completed.

Kenya hopes that the SGR that will eventually move to the country’s border with Uganda will help boost trade and unlock its economic potential.