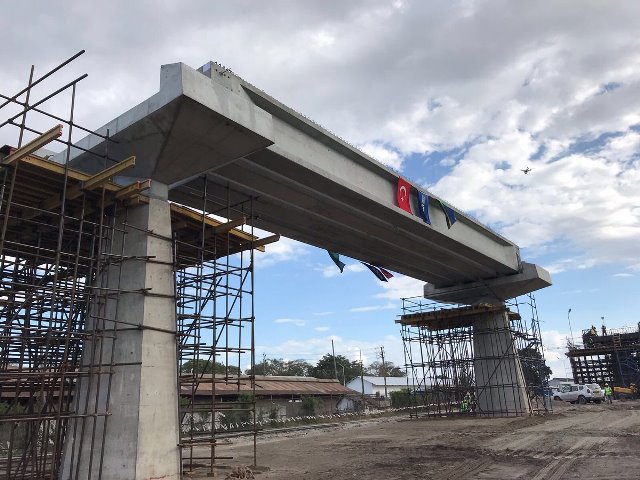 Construction of Tanzania SGR is in top gear with construction of a bridge of the railway line  in Dar es Salaam being at an advanced stage, deputy project manager Eng. Joseph Marwa has said.

“We are using high quality steel and other construction material on this bridge, said Mr Marwa, adding that over 300 manpower has been deployed in the bridge construction.

Construction of the the railway bridge, according to Marwa will be completed in July 2019.

In totality, construction of Tanzania SGR is at a 15 percent mark, although Tanzania Railway Limited(TRL) managing Directo Masanja Kadogosa says that the project is behind schedule by 4 percent mainly caused by heavy rains that have been witnessed in the east African nation.

“We will be working round the clock to recover the lost time. Overall we are doing well, as you can see construction is in top gear,”  Mr Kadogosa told reporters during a tour of the construction site.

As part of the plan to fund the standard gauge railway line, Tanzania has secured more than $400 million from the Trade and Development Bank (TDB) to bolster its construction. Part of the money however will fund construction of a 318MW gas plant.

Tanzania is optimistic that the railway line it is constructing will be the best in Africa. speed of passenger trains, the material used in the construction of the SGR, the technology deployed and cargo handling capacity.

Speed of passenger trains, the material used in the construction of the SGR, the technology deployed and cargo handling capacity are some of the features that sets the Tanzania SGR apart.

Contrary to most modern railway lines which use diesel trains, the Tanzanian railway line will be electrified says Mr Kadogosa.

The ‘plan is to extend the railway line to DRC and Rwanda.