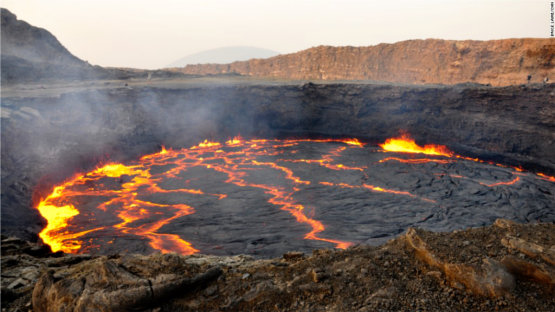 Satellite imagery is being used in Ethiopia to pinpoint areas with geothermal viability in a country where around 77% of the population lack access to electricity.

As Ethiopia is a volcanic country located on the East African Rift, geothermal energy is a serious proposition. Geophysical surveys in the country suggest a potential of 1,000 MW of power generation capacity with the resource estimate even suggesting potential of up to 10,000 MW.

About 20 years ago, a geothermal power plant was built in Aluto-Langano, about 200 km south of the capital Addis Ababa. While currently not operational, development is under way to extend the capacity to 70 MW and restart operation.

But there are challenges, as not that much is known about the sub-surface and the country’s volcanoes.

The RiftVolc project, a consortium of British and Ethiopian universities and geological surveys is trying to change this.

Funded by the UK’s Natural Environment Research Council (NERC), the project is – among other methods – looking at satellite images to help evaluate geothermal potential.

In an article by the Conservation, it is reported that “Using a satellite radar technique, [researchers] discovered that the volcano’s surface is inflating and deflating.

The best analogy is breathing – we found sharp “inhalations” inflating the surface over a few months, followed by gradual “exhalations” which cause slow subsidence over many years.

We’re not exactly sure what is causing these ups and downs, but it is good evidence that magma, geothermal waters or gases are moving around in the depths some five km below the surface.

What makes this particularly interesting is that satellite data is freely available and provides an inexpensive and risk-free assessment of geothermal potential.

With the experience from Ethiopia, similar efforts could be made in countries such as Kenya, Tanzania and Uganda with similar geothermal potential.