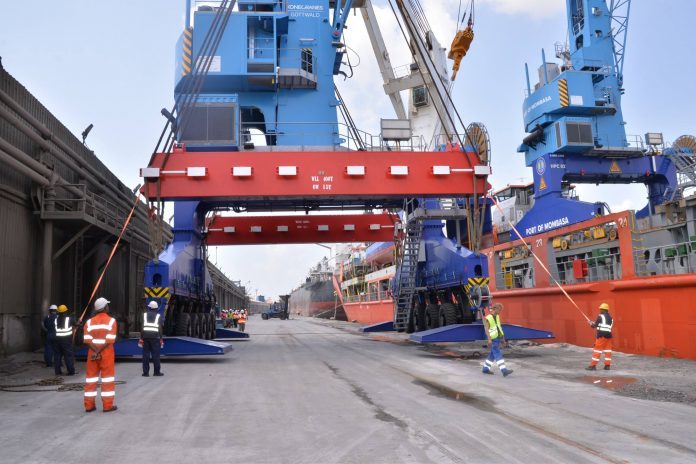 Kenya Ports Authority says it has offloaded two ultra-modern diesel electric cranes at the port of Mombasa to boost efficiency.

While the mobile Harbor Cranes currently used at the Port handle one vessel at a time, the diesel electric cranes will handle two vessels simultaneously.

The cranes will also help mitigate negative effects on the environment.The cranes were funded by TradeMark East Africa (TMEA) through the UK government’s International Climate Fund (ICF) facility.They were procured at a total cost of Kshs 868.27 million (USD 8.7 million).

Eco hoppers will be received in December 2017 to complement the cranes. They will provide dust and spillage-free unloading through a dust control system that minimizes escape of dust during discharge and reduces running expenses on average by 30%.

Last years KPA announced the completion of phase 1 of the Second Container Terminal at the port which increased its annual capacity by 550,000 TEUs.

Also KPA has constructed Berth No. 19, and the dredging of the entrance channel which has enabled the Mombasa Port to handle larger vessels.