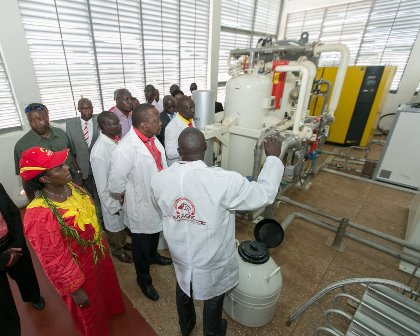 The plant can produce 50 litres of the key ingredient for preservation of livestock semen used in artificial insemination.

The animal resource centre, which serves 16 counties, including Kericho, Kisii and Migori also operates as a semen bank.

Speaking at the event, President Kenyatta said his administration recognised agriculture as one of the key sectors of the economy and would continue to invest heavily in it.

The President, hwo was accompanied by Deputy President William Ruto, pointed out that the new liquid nitrogen plant would ensure that farmers from the region can easily improve their livestock breeds at an affordable price.

“We are implementing all these initiatives because we want to improve production and lift the lives of farmers,” President Kenyatta said.

President Kenyatta said the opening of the liquid nitrogen plant in Sotik heralds a new income-generating opportunity for the youth where they can use motorcycles to supply AI products to farmers.

The President, who was campaigning for the Jubilee government in the area, said Sh80 million had been factored in the budget to upgrade the Kenya Cooperative Creameries (KCC) factory in Sotik to provide market for dairy farmers.

He pledged to reduce the price of a bag of fertiliser to Kshs1,200 by December.
The President called on residents of Bomet County vote for Jubilee in August so that the ongoing projects are not derailed.