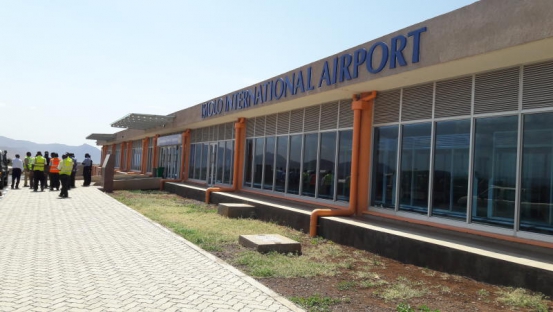 The Isiolo Airport, which is one of the key Vision 2030 projects, is set to start its operation in two weeks, the transport ministry has announced.

Transport Principal Secretary (PS) Paul Maringa has announced that the 1.4-kilometre runway of the airport which sits on a 260-hectare land is expected to complete in seven days.

The Isiolo Airport has a 4,500 square metre passenger terminal building.

During an inspection on Thursday, Mr Maringa gave a nod to the facility to begin operating, but only for domestic flights. Four potential airlines including Jambojet, Kenya Airways, Air Kenya and Fly 540 are expected to begin operations.

Constructed at a cost of Sh2.7 billion the Isiolo Airport is expected to handle 350,000 passengers annually.

The airport is expected to promote growth and unlock economic potential of the region and neighbouring pastoralist areas.

The KAA managing director said seven counties including Isiolo, Meru, Marsabit among others will reap big from the facility in terms of export of miraa, animal products and tourism.

“We will be able to handle International flights but we expect gradual development of other air carriers, for now the facility will start operation with domestic flights,” said Mr Andersen.