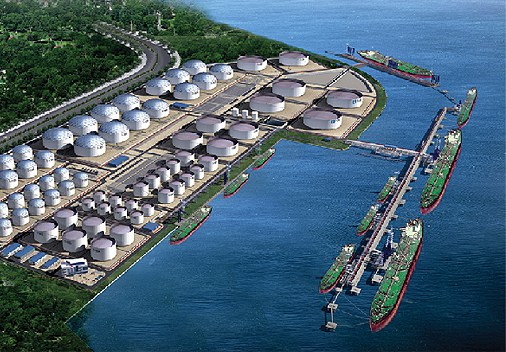 Equatorial Guinea will partner with Saudi Arabia in the construction and financing of the Bioko Oil Terminal tank farm project which upon completion will be West Africa’s largest oil storage facility, Minister of Mines and Hydrocarbons, Gabriel Mbaga Obiang Lima has announced.

The minister said that the strategic agreement with Saudi Arabia will pave way for the construction of the project on the Bioko Island offshore which is also expected to be the third-biggest storage facility in Africa that would firmly put his country on the global energy map.

Construction of the Bioko Oil Terminal in Equatorial Guinea is being spearheaded  by South Africa-based independent oil and gas firm SacOil, the Ministry of Mines, Industries and Energy of Equatorial Guinea, Taleveras Exploration and Production DMCC, Gunvor Group, and the Strategic Fuel Fund Association.

During the signing of an MoU with the firms in 2015, Mr Lima exuded confidence that the  Terminal will play a significant role in meeting oil storage demand in the country.

“The Bioko Oil Terminal will serve the enormous demand for storage in the currently underserved Gulf of Guinea region. This is a definitive forward step for our nation’s petroleum industry and economic diversification agenda. We are proud to announce that the national bank of Equatorial Guinea, BANGE, will be involved in the financing of the project,” he said.

Equatorial Guinea has applied to become a member of OPEC with expectation that Saudi Arabia would lobby for the African country to be accepted as a member.

Equatorial Guinea is among the largest oil producers in Africa, with an oil production of 289,000 bpd in 2015. Oil and gas exports have been central to Equatorial Guinea’s growth and are expected to continue to drive the economy going forward as it diversifies along the oil and gas value chain.

As of 2015, the country had estimated reserves of 1.1 billion barrels of oil.

Large oil reserves were first discovered in 1996. Within a decade Equatorial Guinea’s oil production rose from 17,000 bopd in 1996 to a record 375,000 bopd in 2005. Additional development of existing oil and gas deposits continues along with new exploration and development in other offshore concessions.