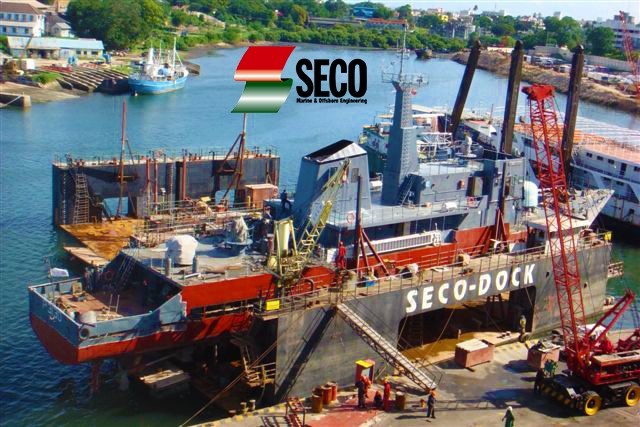 Since its formation in the 1960s, Southern Engineering Company (Seco) has amassed considerable wealth of experience when it comes to marine engineering.

A flagship company of Alpha Group, Seco has over the years morphed growing from strength to strength to its current status offering unrivaled logistical and marine engineering solutions to some of the best firms in East Africa.

It boasts of a client base ranging from engineering companies to oil and gas companies and government agencies across the East African region.

In 2016 the firm grabbed global attention when it successfully unveiled the longest barge in East Africa.

With a capacity of 2,500 dead weight tonnage equivalent to 150 truckloads the vessel will be deployed for transportation of heavy machinery and marine cargo along the East African coast.

Currently Seco has a contract to deliver a newly built modular Jack Up Barge to be named ‘ALPHAHEK 1′ with a maximum payload capacity of 240 tons. The Jack Up Barge is an order from ALPHAHEK Ltd, a joint venture company between Alpha Logistics Services (EPZ) Ltd and Vanthek International.

Vanthek International is the leading pilling contractor in Netherlands with over 70 years of experience in the design and execution of sheet and tubular piling projects. Complemented by Alpha Logistics Services (EPZ) Ltd’s marine assets and business network in East Africa, they are offering comprehensive solutions for the infrastructure projects in the region.

“The first aspect is our unrivalled experience in the marine engineering field. We have mastered the art and can now build anything from passenger ships, barges, tugs and bunker ships.”

The modular self-elevating platform is designed to carry out various works at a maximum water draft of 26.5 meters in ports, harbors, rivers and lakes.

The latest contract to be awarded to Seco is the construction of Kisumu oil Jetty. Kenya Pipeline Company awarded the contract to Seco after a competitive bidding. While the firm boasts of several mega contracts, its success emanates from more than just projects.

“I think it comes down to a number of things,” says Omri Kohen general manager of Seco.

“The first aspect is our unrivaled experience in the marine engineering field. We have mastered the art and can now build anything from passenger ships, barges, tugs and bunker ships.”

“Secondly, over the years we have been able to use cutting edge marine engineering technology in our work. This includes top notch engineering equipment from top notch firms such as Kobelco,” he continues.

The final facet is our staff. Our staff have some of the best experiences when it comes to marine engineering. Our constant innovation has also continued to put us ahead of the competition curve.”

Already the barge that was built by Seco has been deployed for use in construction of Lamu Port and other offshore projects along the West of Indian Ocean and inland water bodies like Lake Turkana. With marine transport firms positioning themselves for major projects such as the Lamu Port which is underway, Seco believes that the launch of its longest barge in East Africa will give them an upper hand when sourcing for jobs.

“The barge is the first to be designed and built in Kenya under internationally recognized classification standards. It meets the Indian Register of Shipping or IRCLASS,” says Cohen.

According to Cohen construction of the vessel is a major step forward in Kenya’s quest to attain its long held aspiration to be shipbuilding and marine service hub. Built in a record six months by 80 Kenyan skilled manpower and inspected by qualified inspectors from outside the country the vessel cost Sh180 million. But this is not the first ship that Seco has constructed.

In October 2015, the firm unveiled Albert Nile 1, one of the four passage ferries it built for Uganda which currently operates at Lake Albert.

In a move that shows the growing influence of Seco, Rwandan Energy Development Corporation Limited EDCL commissioned the firm to build a 14m research vessel. The vessel will be deployed to support research activities currently being conducted under the Lake Kivu Monitoring Program.

“We have the ability of fabricating requirements for energy, oil and gas operations. We understand that each customer has unique requirement so we bank on our technical staff to deliver bespoke projects,” Cohen explains.

Apart from its highly skilled technical staff, innovation and technology continue to play a pivotal role for Seco. The company has a world class laboratory equipped to test their products before being released to the market.

We have the ability of fabricating requirements for energy, oil and gas operations. We understand that each customer has unique requirement so we bank on our technical staff to deliver bespoke projects

The overall goal is to maintain international standards in their entire product offering. The tests in their laboratory  includes OCTG inspection, ultrasonic magnatic particles and testing, material positive identification, hardness, Load hydrostatic and pressure test for offshore and onshore inspection.

“Seco is the first company in Kenya to offer OCTG inspection for oil clients. The inspection service is of great importance to oil drilling firms. We have the equipment and technology to make this exercise possible says Cohen,” adding that the firm plans to introduce its new level of inspection known as above ground storage tank inspection.

Within its heavy lift department Seco maintains cranes that have been certified to international standards for instance Lloyds British. For the past five years the firm has been carrying out lifting operations with leading companies for instance Tullow Oil.  Due to its exemplary work, Seco will be involved in the drilling of four wells in Turkana once operations kick off.

In recent years, Seco has invested heavily in buying top notch equipment aimed at making their engineering work as efficient as ever. For example, the company has purchased Kobelco 250 tonne crane and other specialized equipment to enhance their lift operation services.

Aware of the power of partnership, Seco works with international firms such as Marriot Drilling Group, S.M.P, Halliburton, Baker Hughes, Schlumberger, Green Arava among others.

“We are learning from the best. We have also managed to rally specialists around our projects to ensure that all jobs are done according to international standards,” says Cohen.

A forward looking firm,  Seco has introduced its new subsidiary, Summit that deals in camps and catering. Its camp management division is specialized in fully mobile containerized units. The container units cater for the services of firms such as oil and gas, mining and Energy. The company has already provided such containerized units for Tullow Oil, and Lake Turkana Wind Power, National Oil and Hurlibuton. Seco specializes in recreation, offices, kitchens and workshops units. The camps are managed by Seco.

“Alpha Group has substantial wealth of experience in the food industry. We believe that we are best suited to run and manage the camps on location,” offers Cohen.

Seco also maintains a healthy and safety department to cater for its staff. The firm offers protective gear to employees as well as medical care. The firm recently received an accolade from Lake Turkana Wind Power for its exemplary health and safety standards during their work for the project.

Seco’s core business is backed by Corporate Social responsibility initiatives aimed at involving the communities in all that the company does. The firm takes pride in employing and training the local community in various capacities. The firm is also about to complete the construction of a primary school in Turkana.

“We don’t want to be a profit only minded firm. We also seek to positively impact communities,” says Cohen.

Looking ahead, Cohen is confident that the firm is now as well positioned and focused as ever to participate in most projects that East Africa has to offer. Although the firm boasts of 600 dedicated staff of diverse qualifications, it aims to employ at least 2000 people in the near future.

“We know what we are good at. We understand that we are the leaders in what we do and we will be keen to maintain this position. We will be aggressive in bidding for jobs competitively and it’s our hope that the government will deliberately move to support us because we are a Kenyan company,”