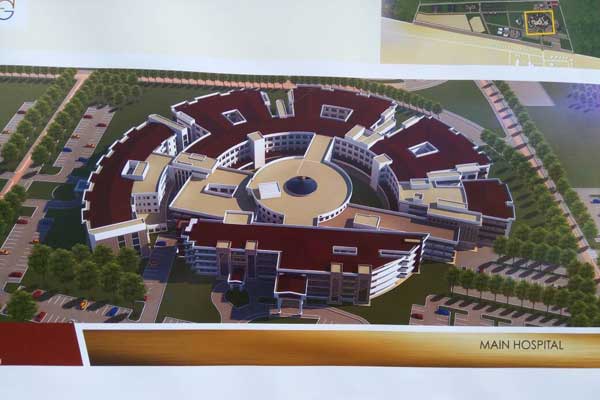 Canadian firm Minaean SP Construction Corp. has announced that an Expression of Interest submitted for construction of the “KABARAK UNIVERSITY HOSPITAL” project in Kenya has been accepted and discussions are ongoing for the signing of a Strategic Partnership Agreement.

Pursuant to discussions held and the exchange of technical information with the lead developer, “Within Foundation” — a not-for-profit Kenyan trust — has accepted the Company as one of the primary bidders for the project.

Kabarak University Teaching, Research and Referral Mission Hospital (KUTRRMH) will be a 500 bed teaching speciality hospital which consists of a main hospital equipped with Cancer and Research centres, with its medical campus adjacent to the thriving Kabarak University campus in Nakuru County.

The value of the EPC contract is estimated to be approximately US$ 257 million. A Strategic Partnership Agreement is anticipated to be negotiated and signed between the two organizations for in-depth involvement in the full execution of the project with other contracts to follow.

The project which is well advanced in terms of completion of a feasibility study, design and architectural drawings, full development planning consent and approvals and is now ready for conducting the final costing and submission of a delivery price.

With the Company’s profile and the track record of its affiliated partner, Shapoorji Pallonji Group, which has constructed 45 hospitals exceeding 19,000 beds and growing, “Within Foundation” is now in advanced discussions with the Company for a long term strategic partnership for the construction of not only KUTRRMH, but also additional mission critical hospital projects throughout Kenya.

Minaean SP Construction Corp. is a company well known for its pioneering efforts in the manufacture of light gauge steel components for the construction industry and modular metal buildings in India.

Upon partnering with India’s well known 156 year old construction conglomerate “Shapoorji Pallonji Group” (SP) in 2016 as an affiliated subsidiary, the Company changed its business model to take advantage of its $7 billion revenue partner’s expertise and track record in Construction and Infrastructure projects globally. The Company through its business relations established with the Government of Canada’s trade offices has been negotiating contracts in Africa and Latin America and is focusing more on construction of hospitals in these countries.

SP is known for its expertise in construction of hospitals, having constructed their first hospital project in Mumbai, India in 1923. Since then SP has established its credibility in this field having completed construction of 45 hospitals, the last one being the well known 600 bed “Al Sabah” hospital in Kuwait.

The Company establishes its ability to execute these contracts in partnership with SP and is confident of being a front runner in this industry by the end of this decade.

The shares of Minaean SP Construction Corp. (parent company) are publicly traded on the TSX Venture Exchange under the symbol “MSP” and on the Berlin and Frankfurt Stock Exchanges under the symbol “NJA”. For more information, please visit www.minaean.com.