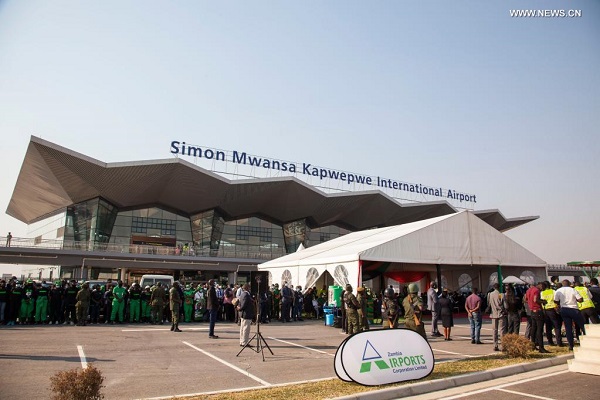 The Simon Mwansa Kapwepwe International Airport in Ndola is about 400 kilometers (250 miles) north of the capital of Lusaka, built at a cost of $400 million.

President Edgar Lungu says the airport has a capacity of 1 million passengers per year and it has a 50-room luxury hotel.

“This development was embarked on to accommodate the anticipated increase in traffic, cargo volumes and passenger numbers,” he said.

Construction of the airport started in 2017. Once fully operational, the airport will have a 3.5-kilometer runway, taxiways and apron, a terminal to handle over one million passengers per year, a cargo terminal as well as a commercial complex and hotel, among other amenities

And the Zambia Airports Corporation Limited (ZACL) announced that the newly built Kenneth Kaunda International Airport (KKIA) in Lusaka was open for public use.

“ZACL wishes to inform its esteemed customers and the general public that the newly constructed terminal-two at KKIA is now operational and will be used for international travel as of today. Domestic passengers will continue to be processed from the old terminal-omen until further notice,” airport management said in a statement.

The facility is expected to increase traffic to 6 million passengers annually from 2 million when only terminal one was operational.

The airports are set to place the southern African nation, renowned for tourism and mining prowess, as a hub for international travel.

And development is timely following the announcement by Qatar Airlines that it would begin flights on Friday to Lusaka.