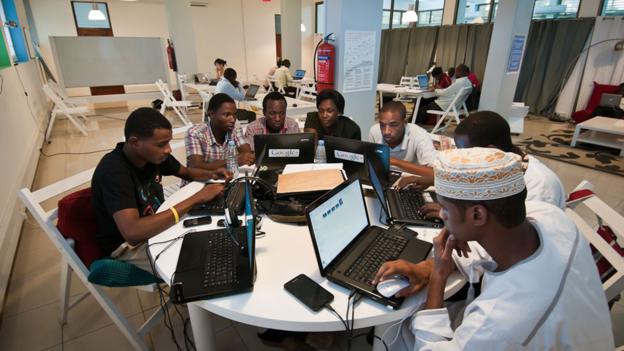 By: Gerelyn Terzo of Sharemoney

The COVID-19 pandemic has demonstrated just how important digitization is to economies around the world.

When lockdown measures were in place and brick-and-mortar establishments were forced to close their doors, the employees and businesses that fared the best were those that were prepared for a digital economy.

And while that transformation is still unfolding, Nigeria has begun making moves to position the West African country out front in the digital revolution.

One math teacher from Lagos, Nigeria — Basirat Olamide Ajayi — demonstrated the importance of having digital capabilities in the education sector. When the lockdown made it impossible for students to attend class, they were unable to study for their exams: Ajayi turned to technology to bridge the gap, tutoring students for free on Twitter, Whatsapp, and Instagram. In six months, some 1,800 students from Nigeria and beyond signed up.

After months of talks, the Nigerian government inked a deal with technology giant Microsoft designed to pave the way for future generations by transforming the economy and preparing the country’s youth for the digital age. Nigeria has identified three key themes to get it there:

Let’s take them one by one.

Most Nigerians use Android devices, where 85% of mobile web traffic originates compared to just under 7% for Apple devices. Nearly 48% of Nigerians between the ages of 16 and 64 use banking and financial apps on their mobile devices. More than half of that demographic used mobile devices for shopping apps. Nearly 99% of mobile-device-owners communicate via messaging and chat apps, making it the most popular mobile service connected Nigerians use.

Digital adoption inched higher by 2.6%, or by slightly more than 5 million people, in January 2021 year-over-year. The number of mobile connections climbed 10% higher in the period, while the number of internet and social media users increased by 22% for both. 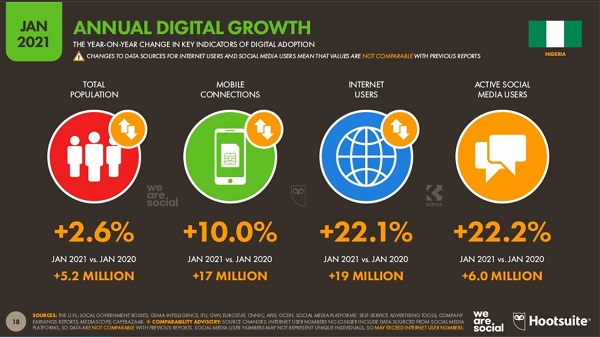 Social media has high growth potential, given the low percentage of Nigerians who use it currently; Of those who do, most are in the 18-24 and 25-34 age brackets and the overwhelming majority of them are males. Widespread adoption of social media platforms would be a boon for the Nigerian workforce and marketers looking to access a new audience. The top three social media platforms in Nigeria include:

Marketers have the potential to reach 5.7 million Nigerians on LinkedIn and about 3 million on Twitter.

Some 5 million Nigerians are eligible to be “upskilled” so that they will be in demand in a digital economy. Microsoft is taking the lead on this, providing 1,700 “trainers” who will take a hybrid approach using the internet and in-person courses. The curriculum serves  both younger generations and government employees. The government will act as a marketplace mediator, matching program participants with potential employers in an attempt to create more than 27,000 digital jobs through 2024. Nigeria’s median age is 18, which should serve its purpose well for training its youth.

Nigeria and Microsoft have established a pair of initiatives, the first of which is targeting corruption. Roughly USD 3.6 trillion disappears from the economy annually. Microsoft plans to team up with local entities to create cloud-based tools to aid the government in battling this enemy.

The company will turn to technologies such as artificial intelligence (AI) and machine learning to spot the vulnerable areas and strengthen them. The second leg in the digital transformation stool is Nigeria’s rich culture, which Microsoft will seek to preserve for future generations with help from a newly established venture with Nigeria’s National Institute of Cultural Orientation (NICO) and the tech giant’s suite of tech tools.

While Microsoft is the most high-profile company moving Nigeria towards digitization, it isn’t the only one doing so. A fintech startup called Mono recently secured USD 2 million in a seed investment round, the proceeds from which will be directed toward bolstering connectivity on the entire African continent.

The company makes it possible for digital businesses to access financial and identity information on their users from financial institutions on one API. Mono was chosen to be a participant in a Y Combinator accelerator program, through which it also received USD 125,000 as a testament to its potential impact on the region for digitization.

Nigeria suffers from a financial exclusion rate of 40%, which is one of the worst showings in Africa; Nigerians have a high tendency for being unbanked or underbanked. Mono is looking to change that by promoting financial inclusion and establishing an open finance environment.

As it stands, less than 40% of Nigeria’s population over the age of 15 holds an account with a financial institution, according to Hootesuite data. A mere 2.6 of that demographic has their own credit card, while almost 6% possess a mobile money account. Just over 6% of this segment either buys items or pays bills over the internet. Nigerian men are more likely to own a credit card and make online transactions than women.

As Nigeria goes digital, it stands to bolster a languishing economy that had been mired in recession even before the pandemic. While the economy has started growing again, it does so at a snail’s pace, with GDP increasing 0.5% in Q1 2021. Nigeria’s economic recession ended in Q4 2020 but this was overshadowed by the fact that the economy contracted 1.9% in 2020, the second year the economy shrunk in the past half-decade.

In 2021, Nigeria’s GDP is projected to grow 1.5% followed by a more robust 2.9% in 2022, fueled by strengthening crude oil prices. The petroleum industry contributes 66% to government revenues.

If Nigeria and Microsoft succeed at creating jobs and training the workforce with digital skill sets, the West African nation could be close to diversifying its revenue streams and strengthening its fragile economy.

Top 6 African cities leading the way to a green future

Africa likely to be most affected by looming water shortage, UN warns