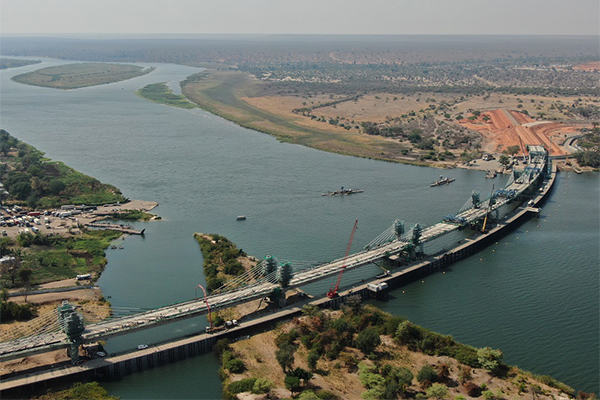 Kazungula Bridge construction that has been ongoing since 2014 has finally been completed, the contractor has announced.

Daewoo E&C won the deal in 2014, and it was the company’s first overseas project to build an extradosed bridge.

The Kazungula bridge project comprises the construction of road/rail bridge and so an extradosed bridge model was applied to widen distances between piers and to allow vibration control.

Kazungula Bridge has six main towers standing in a row, which provides a fine view. It is expected to become a landmark in the region.

The bridge is expected to bolster trade between Zambia and Botswana and the entire region through increased trade activities. It will also help unleash the economic potential of other land-locked countries such as Zimbabwe, Malawi, Namibia, Mozambique and Democratic Republic of Congo.

It will also reduced transit time for freight and passengers, reduced time-based trade and transport cost as well as improved border management operations arising from the one border facility.