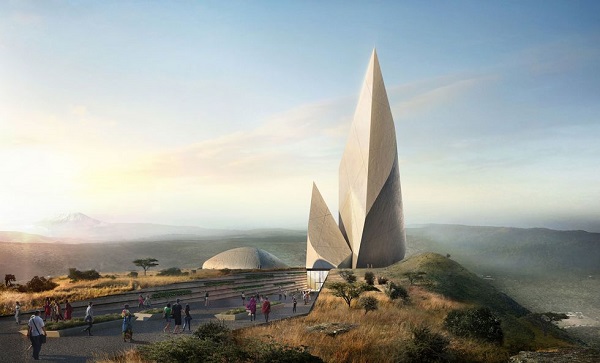 Plans are underway to construct a huge museum in Kenya’s scenic Rift Valley, a move that proponents say will “allow visitors to explore human origin and evolution from a scientific perspective.”

The Sustainable Inclusive Business (SIB) says it has partnered with Kenya’s famous paleontologist Richard Leakey to construct the museum. Construction work is expected to begin in 2022 and completed in 2026.

Called Ngaren, The museum of Humankind will be built in Turkana– largely considered to be the cradle of mankind-and also an area where Dr Leakey first discovered the nearly complete skeleton of a Turkana Boy in 1984.

Daniel Libeskind’s New York architecture firm has been listed to design the museum that will be built on a cliff edge.

“The museum will be a place for discovery, wonder, and contemplation,” said Libeskind. “Through the architecture and exhibitions, Ngaren will anchor all walks of life to Africa: the epicenter of human existence.”

Libeskind’s design comprise two structures modelled on some of the earliest hand tools used by humans to make carvings. In renderings, these appear to be built of stoney blocks sculpted into a tapered and pointed shape that resemble stalagmites.

A third, dome-shaped building will complete the museum.

Ngaren will house artifacts such as plant and animal fossils and findings such as primitive tool remnants, but Leakey is interested in creating a contemporary experience for visitors.

“Maybe we don’t want to exhibit the original [fossils] at all. Why don’t we have a room you come in to wearing a 3D headset and sit quietly in the middle of a band of Homo erectus moving all around you? That’s much more interesting than a skeleton of Turkana Boy behind glass,” Leakey shared with The Independent.

Construction of the project is expected to cost $7 million. So far Dr Leaky has managed to raise over $4 million through an online campaign.

“We hope the project will immensely contribute to the development of Kenya by creating, teaching and promoting education, science, sustainability and equity, and attract visitors from near and far and bolstering economic development in the region,” said SIB.